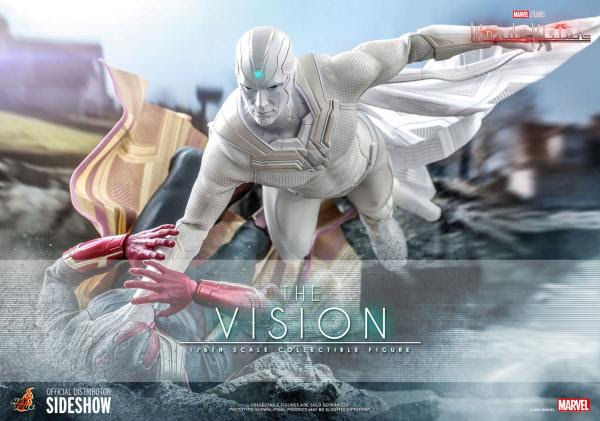 This whole action figure announcement would have been a spoiler not all that long ago, as the white version of Vision was the ‘end boss’ of Disney Plus’ WandaVision. The show had seen Scarlet Witch set up an alternate reality of sorts, in the small town of Westview, NJ.

This came about by her use of chaos magic of course, which was explained in the show. In the town, Vision was very much still alive, having never been killed by Thanos, and the pair even had children together. That all came crashing down though, when Agatha Harkess made her presence known, and S.W.O.R.D. reactivated the original Vision.

Other than the looks, which resembled the classic second iteration of Vision in the comics, the new Vis was not very nice. He was programmed to eliminate Wanda’s Vision-recreation, and capture the Witch herself.

The newest announcement from Hot Toys is just that version of the former hero. He comes complete with all-white outfit, as well as a snap-on energy blast for his light-up forehead gem, and a stand.

The Vision is set to ship out in the third quarter of 2022, and is priced in at $250 USD. Check him out on Sideshow Toys web-shop, and get your pre-order in if you so desire.

Want more of WandaVision? Hot Toys has collector figures of Wanda herself, and the original Vision too. Both are up for pre-order as well, and both are expected to ship out in the same 3rd quarter, 2022 timeframe as the above.

Jason's been knee deep in videogames since he was but a lad. Cutting his teeth on the pixely glory that was the Atari 2600, he's been hack'n'slashing and shoot'em'uping ever since. Mainly an FPS and action guy, Jason enjoys the occasional well crafted title from every genre.
@jason_tas
Previous Trailer: Blightbound brings multiplayer dungeon-crawling to console and PC this month
Next Rumor: Apparently PES 2022 Will Be Free-To-Play