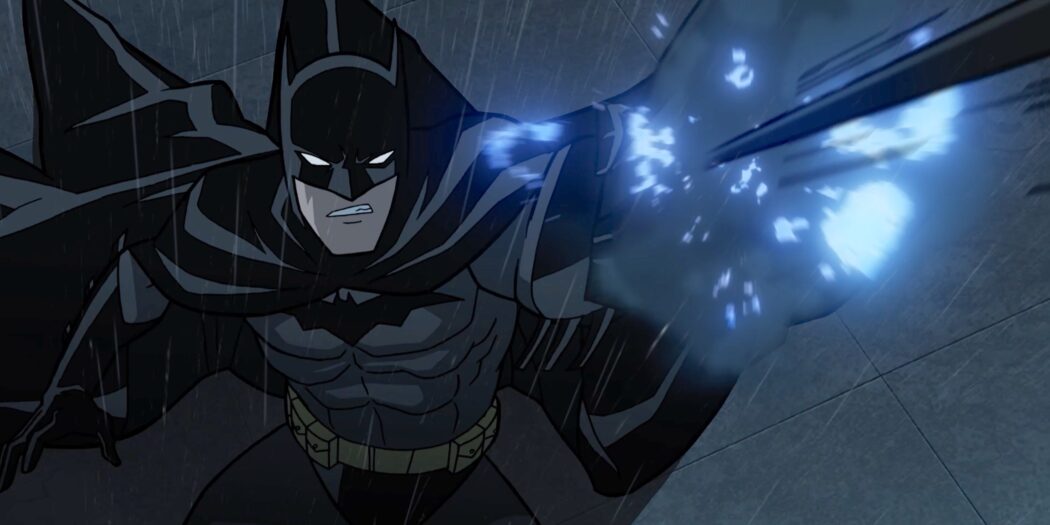 Warner Bros continues to showcase the action of the latest animated Batman film, the upcoming adaptation of The Long Halloween.

We’ve been showcasing a whole mess of images and trailers for Batman: the Long Halloween parts 1&2 over the last few weeks. Quite frankly, what has been shown of the movie is looking great, and the latest helping of imagery is no different.

In today’s release, fans get to see not just Batman and Catwoman, but also the menacing kinda/sorta zombie Solomon Grundy. Oh, and then there’s a completely deranged-looking Joker too.

All of the above will be in action in The Long Halloween, some in smaller roles than others. If I remember it right, Grundy wasn’t in much of the book, while the rest were in pretty much the whole thing. Well, except for Batman, who was in the whole thing.

Anyway, you can expect to be able to finally see part 1 of Batman: The Long Halloween on June 22nd. And that’s whichever way you prefer, since it’ll be on both digital formats and Blu Ray, day and date.

With the Holiday Killer infringing on his territory, Joker makes it his mission to ensure everyone understands that Gotham City has “only room for one homicidal maniac” in Batman: The Long Halloween, Part One. Troy Baker (The Last of Us, Batman: Arkham Knight) voices the Clown Prince of Darkness in the all-new film.

Where action is concerned, Catwoman keeps pace – and sometimes outpaces – Batman throughout Batman: The Long Halloween, Part One. The late Naya Rivera (Glee) provides the voice of Catwoman.

He may not use a gun, but the grappling hook is a mainstay in Batman’s arsenal – and he puts it to good use in Batman: The Long Halloween, Part One. Jensen Ackles (Supernatural, The Boys) provides the voice of Batman.

Batman is forced to fight battles on multiple fronts – in pursuit of the Holiday Killer, attempting to halt a mob war, and dealing with a rising group of Gotham City’s villains, including those far beneath the streets
– in Batman: The Long Halloween, Part One. Solomon Grundy, voiced by Fred Tatasciore (American Dad!, Family Guy), mostly keeps to his home in the sewers … until provoked.

Jason's been knee deep in videogames since he was but a lad. Cutting his teeth on the pixely glory that was the Atari 2600, he's been hack'n'slashing and shoot'em'uping ever since. Mainly an FPS and action guy, Jason enjoys the occasional well crafted title from every genre.
@jason_tas
Previous Snake Eyes: Deadgame to close out with roster of guest talent, including Larry Hama
Next Ghostbusters Day results in fresh Plasma Series announcements