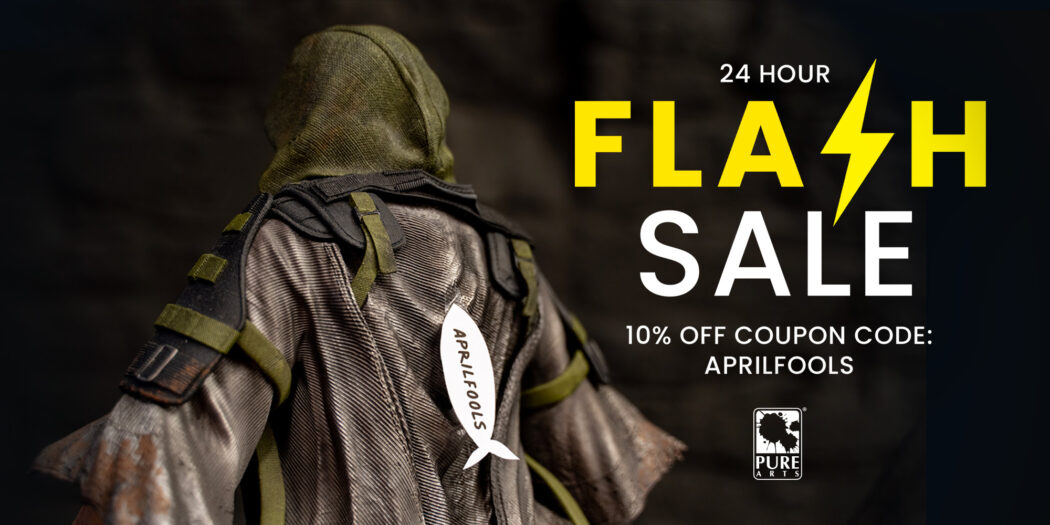 When is an April fool not an April fool? When it’s the new sale from PureArts, that can nab you 10% off a bunch of their awesome collectibles.

Not so foolish really

PureArts is a name that you’ve no doubt seen with increasing regularity. The collectible-maker has been cranking out some great stuff, particularly when it comes to Assassin’s Creed. If you’re a fan of that franchise, you’ve likely been temped to make some purchases. And if you have, then this news today might make the decision a slightly easier one for you.

The company has revealed that tomorrow at 12am, or tonight at midnight if you prefer, will signal the beginning of a 24 hour flash sale. Not everything that they stock will be included, but a whole bunch of cool stuff will be. So if you’ve had your eye on something specific, then you might want to check out the list.

Click here to see what’s going to be included in the deals, just don’t expect to be able to use the code yet. Remember, even though you can check the sale page, the code won’t work till tonight/tomorrow morning at 12am. At that time, you can use the code APRILFOOLS at checkout to get your markdowns.

Just a tip though, you might want to get in on the festivities sooner than later. I notice that some of what’s listed is in pretty short supply.

Jason's been knee deep in videogames since he was but a lad. Cutting his teeth on the pixely glory that was the Atari 2600, he's been hack'n'slashing and shoot'em'uping ever since. Mainly an FPS and action guy, Jason enjoys the occasional well crafted title from every genre.
@jason_tas
Previous Mezco revisits blue and yellow suited Wolverine for new deluxe
Next Trailer: Ripout brings co-op play to space-based horror