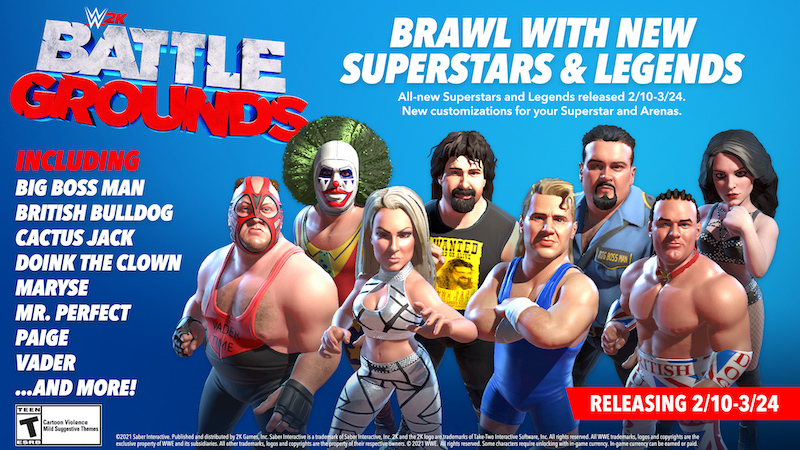 Home / News / If you missed it, WWE Battlegrounds is in the middle of a monster roster update

If you missed it, WWE Battlegrounds is in the middle of a monster roster update

You may or may not be a fan of 2K’s more arcade-y take on WWE-branded wrestling, WWE Battlegrounds. But either way, you’ve gotta love that the game that saw release last year has had no shortage of support.

Saber Interactive and 2K have heaped on the downloadable content, and the best part is that it’s all been free. And if you’ve got a copy of the title, you’ll find that there’s a heck of a lot more of that happening right now. The game is currently adding to its roster in a big way, and that includes both classic and modern superstars.

As with all of the updates that’ve come before though, some of this content is locked and needs to be released via in-game means. Some though, is suited-up and ready to go right from the jump.

The updates started on the 10th of this month, and are set to run through the 24th of March.

Here’s who’s included and when you can grab them:

**Some Superstars, arenas and cosmetics require unlocking through in-game currency. In-game currency can be earned or purchased. Unless otherwise indicated, content requires unlocking to access.

Jason's been knee deep in videogames since he was but a lad. Cutting his teeth on the pixely glory that was the Atari 2600, he's been hack'n'slashing and shoot'em'uping ever since. Mainly an FPS and action guy, Jason enjoys the occasional well crafted title from every genre.
@jason_tas
Previous Trailer: Eximius combines RTS with FPS for multiplayer action
Next Trailer: Bandai Namco teases next Tekken 7 DLC character