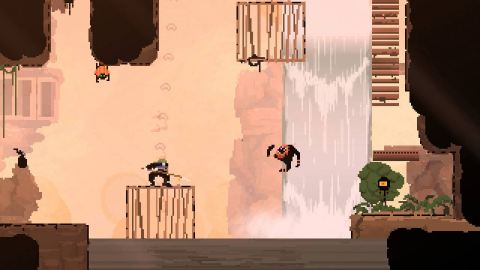 Olija strands gamers on a deserted island in what’s a fairly thin week for the Switch. A double-dose of DLC, TOHU , Gods Will Fall and more round it out.

So, still very much coming off of the holiday season, gaming isn’t all that explosive right now. There hasn’t been very much in the ways of notables seeing release this month, and that’s a trend that continues here in the last part of January.

That’s not to say there’s nothing worth checking out, just that there are no blockbusters out there. What there is though, is a very promising looking little side-scrolling retro title called Olija.

From Devolver Digital, Olija follows the character of Faraday as he’s lost at sea, wrecking on a desert isle. Why’s it called “Olija”? Because that’s the name of the mysterious woman he encounters in this unknown country, and finds himself bound to.

Outside of Olija, there’s also the DLC that I mentioned. Both Dead Cells and Immortals: Fenyx Rising have new downloadable content. There’s also a pile of indies hitting this week, with some gems mixed in. Specifically, check out Gods Will Fall and TOHU. Both look interesting.

* Players will need to connect to the internet and download the latest update data to access certain in-game events as they become available.

Jason's been knee deep in videogames since he was but a lad. Cutting his teeth on the pixely glory that was the Atari 2600, he's been hack'n'slashing and shoot'em'uping ever since. Mainly an FPS and action guy, Jason enjoys the occasional well crafted title from every genre.
@jason_tas
Previous Hot Toys bringing The Mandalorian’s Dark Troopers to life in 2022
Next Trailer: No regerts, Postal 4 has new mission and more