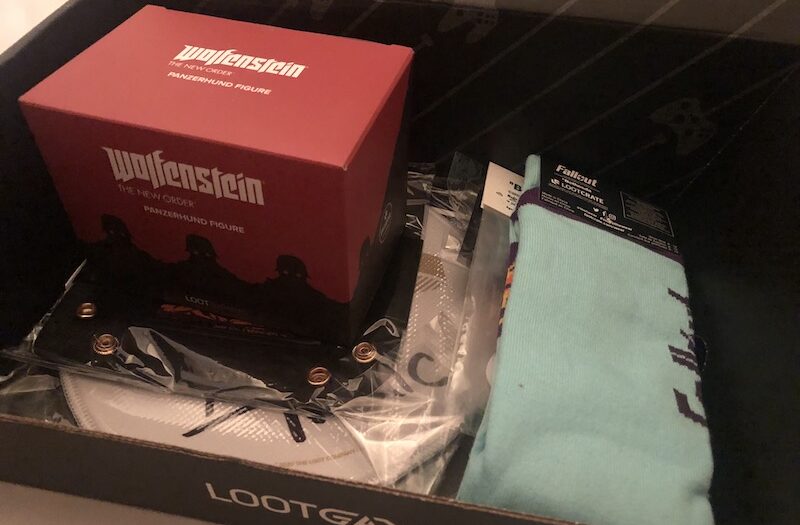 Loot Gaming closes out the year with a solid crate that loaded up with some good stuff from the likes of Fallout, Prey, Wolfenstein, and Dark Souls.

Rounding out the year

Yes, this is an unboxing for November’s Loot Gaming, not the official December Crate. But with the way Loot Crate’s subs run, December’s Crate won’t actually arrive till the very end of the month into January of 2021. So in a way, this is kind of the year-ender.

It’s a pretty good one too, with some surprisingly cool stuff. It’s usable too, for the most part, with a solid spread of goodies that run the gamut from wearables to collectibles.

Let’s have a look…

Most of this past month’s Gaming Crate is… flat. There’s a lot of low-pro stuff loaded into this one, but that’s not necessarily a bad thing. Though as you can see, it’s pretty Bethesda-centric too. So if you’re not big into their catalog, well you might not find a ton that you’re crazy over here.

Personally, I’m into most of what Bethesda produces, so the content is just fine with me.

First up though, is a little Dark Souls item, in the form of a valet tray. Not sure what that is? Well, it’s a little tray that is meant to hold not your pocket stuff when you come home. So you load your wallet into it, your keys… etc. This one’s not tremendously voluminous, but it should still serve nicely for smaller items. Assembly is simple, just snap the ends together.

Next up is a pair of Fallout socks. They’re pretty self-explanatory, but the color is pretty sharp, and the bottom has a little padding so you have a nice soft step. Dig ’em.

This marks the second Prey-branded mousepad that I’ve gotten from LC. I can’t say I’m overly upset by that since the game is actually pretty great, which I discovered way after launch, and the pads are neat.

This one has a nice slick surface, as well as a decent amount of padding and a grippy backside (phrasing?). And of course, the front of it has a little Prey humor on it, with “not a mimic” scrawled across it. Fun if you’re a fan of the game.

And if you’re not, well you might want to give it a shot. Don’t get lost in the fact that it reboots a series that didn’t need one (it needed a straight sequel), but if you like Bioshock in particular, give it a shot. You might like it.

While Prey might be a little niche, Wolfenstein definitely isn’t. Bethesda’s FPS series has exploded with a great revamped series, and even a spinoff that was better than it got credit for.

If you’re an FPS fan, then chances are you’ve played one of the games under the Wolf banner. And if you did, then you remember the Panzerhund. Giant robot dogs, they were one of the biggest hassles, particularly in the original “New Order”.

This little replica is sized to maybe be in rough scale with 3.75″ G.I. Joe figures, though it’s not an action figure. The Hund is immovable, and pre-posed on its stand. Sort of. You can actually remove it from said stand, which is puzzling, but also pretty cool if you’d like to have it in a diorama or even use the stand for a different figure.

I would’ve liked to have seen some kind of moving parts on this one, but it’s still a nifty little figure.

The pin and… an air freshener

The final item in the Crate (other than the pin) is an air freshener. Yes, that’s a little oddball, but it’s cherry and I’m not going to argue. It’s also Fallout “Nuka Cola” branded, so really there’s plenty of cool-factor happening with it.

I have happily hung it up in my car, and can report that it does smell like a post-apocalyptic cherry. So there’s that (I like it). The pin there should be no argument about though, as it’s some kind of awesome wraith… or something. It’s cool, don’t worry about what it’s referencing. I didn’t, and stuck it on a cap.

So again, this one was basically for Bethesda fans. the vast majority of stuff in this Crate was branded with the company’s properties. Actually, everything was, except the valet and the pin (I think).

As I mentioned before though, that could be a good thing depending on where you stand. Also great is that most of this is usable stuff. I’ve already made use of all of it except the figure. I have no idea where I’m gonna put that.

If you dug this look at the November Loot Gaming Crate, and you’d like to pick the next one up or subscribe for the next year, check out Loot Gaming’s page for the line here.

You’ll be able to get something going via that link, including buying into the December offering, which is available for purchase until the 27th.

Jason's been knee deep in videogames since he was but a lad. Cutting his teeth on the pixely glory that was the Atari 2600, he's been hack'n'slashing and shoot'em'uping ever since. Mainly an FPS and action guy, Jason enjoys the occasional well crafted title from every genre.
@jason_tas
Previous BG’s last minute 2020 gift guide
Next Trailer: SNK’s Fatal Fury First Contact arrives on Switch