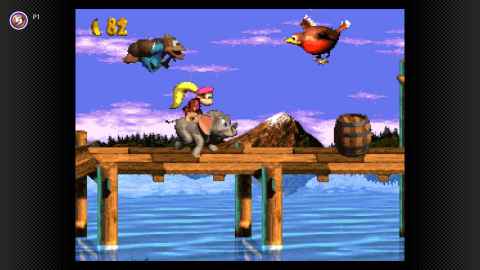 Nintendo is finally adding a few more titles to the Switch’s online subscription service, and they include the series capping DKC 3.

I remember the first Donkey Kong Country for the SNES extremely well. It was a revelation, with its rendered looks, and also brought the big title ape back into the spotlight. The two sequels though, didn’t catch my eye for some reason.

But that’s me, and there are more than a few fans of the whole series. It’s understandable, since all of them were extremely well made adventures, and offered the addictive but tough-as-nails platforming action that only Nintendo could deliver.

And now, if you’re a subscriber to the Nintendo Switch’s online service, you can finally play all three of these gems in one place. Yep, Dixie Kong’s Double Trouble is set to hit the service this week, and it’s not alone. A total of 5 new games will be arriving, with 4 SNES titles and 1 NES entry.

All of the above will be landing on the Switch on December the 18th, this Friday. Again though, this is for subscribers only.

Jason's been knee deep in videogames since he was but a lad. Cutting his teeth on the pixely glory that was the Atari 2600, he's been hack'n'slashing and shoot'em'uping ever since. Mainly an FPS and action guy, Jason enjoys the occasional well crafted title from every genre.
@jason_tas
Previous Audeze LCDi3 headphones (Gear) Review
Next Trailer: Tech-heavy Van Saar gang arrives in Necromunda