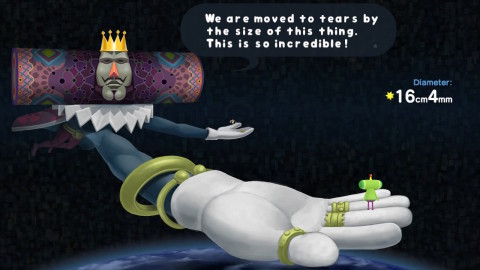 The King and Prince have returned to savagely roll up everything in their path and re-forge the cosmos. Katamari Damacy REROLL is out now.

The King of All Cosmos has knocked out all the stars in the sky after a particularly rambunctious night of fun. Realizing his mistake, The King has tasked his young son, The Prince, to go to Earth and roll up as many things as possible to recreate the missing celestial bodies. Paper clips, books, cars, buildings, mountains, and continents, nothing is too big or too small for The Prince and his adhesive Katamari ball. For players looking to challenge their friends to a “roll-off,” Katamari Damacy REROLL features a head-to-head local multiplayer mode where the player who rolls up the biggest Katamari ball wins praise from the King of All Cosmos.

Katamari Damacy REROLL is out now on the PS4 and Xbox One.

Jason's been knee deep in videogames since he was but a lad. Cutting his teeth on the pixely glory that was the Atari 2600, he's been hack'n'slashing and shoot'em'uping ever since. Mainly an FPS and action guy, Jason enjoys the occasional well crafted title from every genre.
@jason_tas
Previous Night City Wire ep.5 centers on Cyberpunk 2077’s Johnny Silverhand
Next New graphic novel Raptor walks between two worlds