Marvel’s premier superhero team is about to go heavy metal. Avengers: Mech Strike finds the team geared up in some impressive armor.

With a roster that counts many of the Marvel U’s most powerful heroes, the Avengers are able to handle almost anything. And when they can’t, they improvise. That’s just what Mech Strike will find them doing, when the team gets suits of Stark-created armor to tackle something new.

According to Marvel, this new threat to Earth is nothing the Avengers have seen before. And that’s where the suits come in. Writer Jed MacKay explains…

“Heavy metal! When the Avengers come up against something that defies their usual methods, new tools are needed for the job: giant robot suits,” said MacKay. “It’s been a blast to take on the Avengers and really put them in the thick of it. When you’re dealing with the Avengers, everything is big. Big action. Big stakes. And now, big robots!

“We’re going for non-stop, full-bore action, with a lineup of Avengers favorites going up against an unexpected new foe…that might end up being quite familiar! Aliens, robots, dinosaurs, Martians…it’s going to get worse before it gets better for our heroes.”

It sounds like Mech Strike is going to be kind of a big deal, with Marvel talking about trailers and teasers to come. There’s also no release date yet for the first issue of what will be a 5-part story. So basically, stay tuned for much more on this heavy metal war.

You can check out the Kai Zama cover for issue #1 below, as well as a few preview pages.

Jason's been knee deep in videogames since he was but a lad. Cutting his teeth on the pixely glory that was the Atari 2600, he's been hack'n'slashing and shoot'em'uping ever since. Mainly an FPS and action guy, Jason enjoys the occasional well crafted title from every genre.
@jason_tas
Previous Trailer: Bee Simulator buzzes onto PC
Next Check out Nightdive and Valiant’s Shadowman remaster 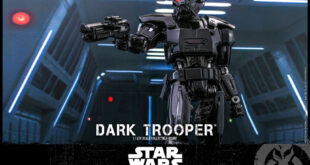