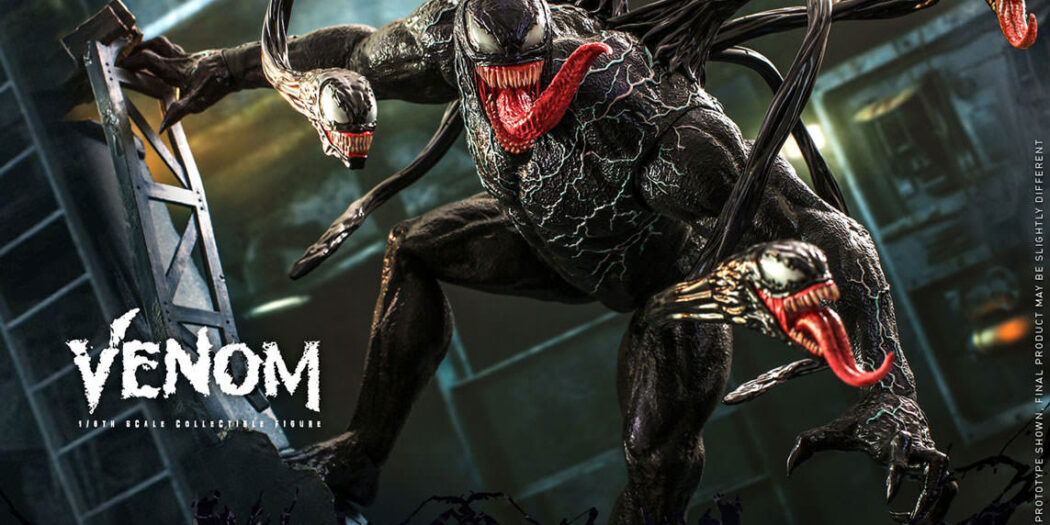 Want to see what might be the most incredible figure of Marvel’s Venom ever? Yes, even without the white spider, it’s that good.

The Venom movie was a smash hit at the box office, raking in tons of cash and bringing the Spider-Man villain/anti-hero to the big screen for the first time. The film starred Tom Hardy as Eddie Brock and was… okay, from a fan’s perspective.

The story itself wasn’t all that faithful to the comics, was my main problem. But even so, it was hard to argue with the actual visual depiction of Venom. The symbiotic creature was phenomenal in almost every way. True, he was missing the white ‘spider’ emblem, but that’s really it.

And now that awesome design is coming to Hot Toys lineup of movie-inspired 12″ figures.

As you can see from the gallery above, this Venom figure is loaded. He’s got over 24 points of articulation and tons of accessories, including Riot’s sword and multiple head sculpts. There’s actually a Special Edition too, that comes with the extra snake-like Venom head that you see in the image directly above.

What you can’t really see from the images is that the figure also has a special paint application. Hot Toys says that this polarized paint app will give the figures “a glistening sheen that eerily catches the light to imitate Venom’s alien flesh.”

Of course, all this awesome doesn’t come cheap, but if you’re a Hot Toys fan then you know that’s par for the course. The Special Edition of Venom can be pre-ordered right now from Sideshow Toys for a whopping $405 USD. There’s also quite a wait ahead for him too, as he’s set to ship out in quarter 1… of 2022.

Jason's been knee deep in videogames since he was but a lad. Cutting his teeth on the pixely glory that was the Atari 2600, he's been hack'n'slashing and shoot'em'uping ever since. Mainly an FPS and action guy, Jason enjoys the occasional well crafted title from every genre.
@jason_tas
Previous Override 2: Super Mech League dated for December
Next Trailer: Dirt 5 races onto current-gen consoles