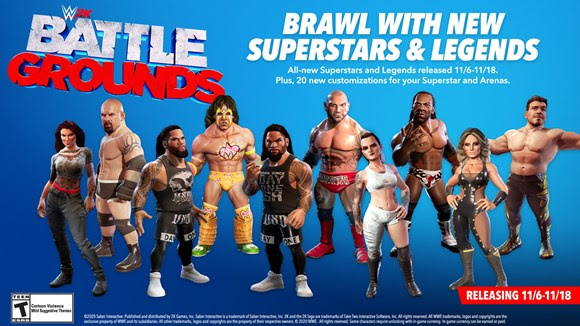 Released not that long ago, this year’s WWE title from 2K Games is a healthy bit different than you might be used to. And by that I mean that it’s faster, flashier, and cartoonier than the usual WWE series. Though next year that more sim-like title will be back around, it’s Battleground’s time now, and that means DLC

Announced today, 2K Games has infused the game with some brand new wrestlers, and this drop is just the tip of the spear. A total of 50 new grapplers will be making their way into the game in the months to come, rounding out an impressive lineup of past and present talent.

These will be a mixture of unlocked and ready-to-play characters, and those that will need to be earned in the game. From the looks of it, that’ll be the norm as these packs get into a regular schedule of release.

Again though, those guys are just the start. Waves 2 and 3 have been unveiled as well, and will include:

But wait, there’s more. Each drop will also include a selection of new create items. If you’ve played the game, then you know that if there’s one area that needs serious attention, it’s the create-a-wrestler feature. So it’s very welcome indeed to see just that coming out of 2K.

Expect to see “Superstar and Battleground arena customization items, including outfits, face paint, arena designs, color schemes and more”. The rules for this stuff will be the same as the wrestlers, in that some will be unlocked immediately, and some will require said unlocking. That’ll be handled via in-game currency that you can either earn or purchase.

All of this is welcome (well, maybe not the micro-transactions), and should work to make what’s already a pretty fun and unique WWE experience that much better. If you have yet to play, click here to check out our full thoughts on WWE 2K Battlegrounds.

Jason's been knee deep in videogames since he was but a lad. Cutting his teeth on the pixely glory that was the Atari 2600, he's been hack'n'slashing and shoot'em'uping ever since. Mainly an FPS and action guy, Jason enjoys the occasional well crafted title from every genre.
@jason_tas
Previous Crash Bandicoot (sorta) crashes Tony Hawk 1 and 2
Next G.I. Joe: Operation Blackout (Xbox One) Review