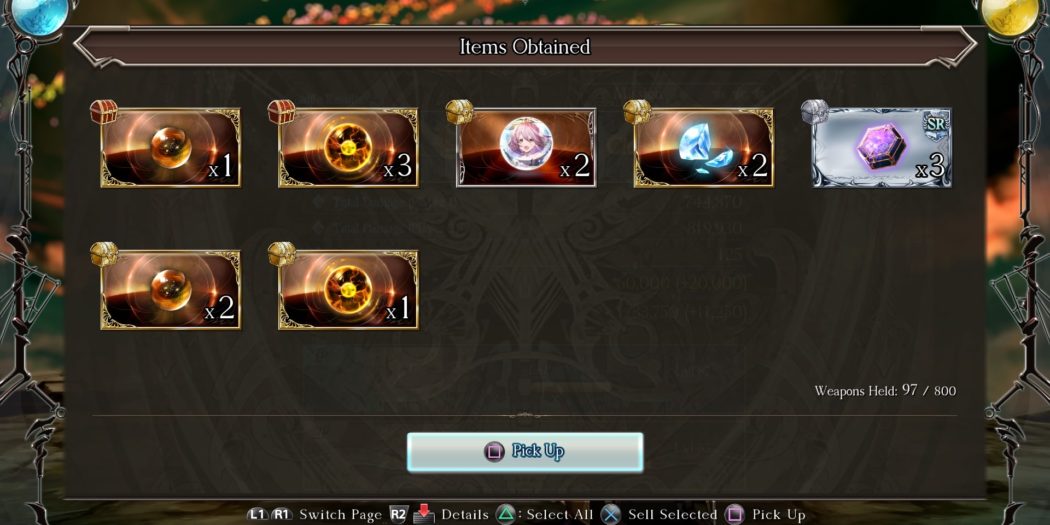 Home / News / Granblue Fantasy Versus Gives Grinding its Due

Granblue Fantasy Versus has the kind of forgettable fighting game story always reserved for genre spin-offs. After all, the only way to make good friends fight each other with high stakes is through brainwashing, memory loss, and similarly trite, non-canon engagements.

Every story cut-scene comes down to “Katalina (or current, memory-displaced character), it’s us! What are you doing?”

“We’re going to have to fight her. Let’s snap her out of it!”

(These aren’t verbatim, direct quotes, but it’s definitely in the spirit of the dialogue.)

Under-designed, maniacal spirits are to blame, and they have been delivered by the hands of Beelzebub.

Basically, you’re just bouncing from island A to island B to stop your homeboys from running amok.

The story is skippable and forgettable, sorry to say.

But the RPG Mode is not.

The Grind is Good

Granblue Fantasy Versus’ story mode is designed to share an incredible amount of features with the mobile game, and all of them are to its benefit.

Let’s start with the most obvious. Excepting the overly long beginning tutorial, the entire game can be played in two person co-op. Much like you can invite crew members to help you in Raids in the mobile title, you can request help of the world’s populace in any quest. You can even bring a local pal in for the ride, making the impressively difficult boss fights only more fun.

As in all things that allow it, I highly recommend playing through RPG Mode with a friend. Planning and plotting your way through the games hard-mode fights and grind is only more fun when someone is doing it with you.

Normal mode, much like in the mobile game, can be dashed through (especially if you’re skipping that story) with little effort and zero planning, but once you’ve unlocked the hard-mode versions of every stage, you’re going to have to start taking a long, hard look at your weapon grid.

The way it works is pretty simple: each weapon grid is a set of one main weapon and nine supporting weapons that work in tandem to increase your attack and health, giving you the ability to deal the damage and survive the hits the toughest boss fights will throw at you. The weapons run the spectrum from Rare to SSR (or bronze, silver, and gold rarity, for those unfamiliar with the Granblue nomenclature). For normal mode, the occasional SSRs you pull from the random draws will be enough, but in order to maximize your grind and slaughter hard mode’s final boss, you’re going to want to optimize every grid for every element.

(Mostly, nothing more than an ATK total of 60k is necessary, but the grind is all about optimization, so fiddling your numbers up to 70k and above is what it’s all about.)

To achieve such great numbers, you’re going to have to grind out the bosses on hard mode. Each boss has a powerful weapon associated with it, as does each character (and some weapons even give you skins to change the way your weapon looks in fights). This would be a total slog if it wasn’t for the fact that every Primal Beast boss in this game is a ton of fun to fight.

The Primal Beasts are hulking colossi that will dish out the hurt. Each fight’s multiple moves require precise dodging and constant pressure. Colossus himself will march you into a corner until he can one-shot you and your pal with a hellish sword attack, while the Rose Queen surrounds herself with shields that can only be broken by supers and the murder of sparkling butterflies.

Somehow, these boss fights are fun. Whether it’s the grind that makes it so and seeing your numbers inflate every time you fight them or the battles themselves, Granblue Fantasy Versus avoids the typical fighting game boss fight pitfalls of moronically overpowered and un-fun showdowns.

The goal of the reward certainly doesn’t hurt. Each boss’s weapon can’t be bought just once: you’ll need four of each to uncap them into the best possible version. Even then, your grid might operate best with further copies in the supporting slots, and you’ll have to level them up (and their skills) using rupees and skill gems you’ve acquired from missions.

That means fighting each boss as many as twenty times or more. Fortunately, Granblue Fantasy Versus helps you set a rhythm. Finding different characters to excel for different fights is part of the fun (as is leveling each character to 100, separately from your weapon grids) (those last fifteen levels will require some patience). Metera’s Great Fall and Aetherial Seal are particularly effective against Colossus, whose giant hit-box gets smacked by every frame. Yggdrassil, meanwhile, is better-suited to the likes of Katalina. Her Light Wall absorbs Yggdrassil’s hits and allows her to maintain the pressure, while her Skybound Art, Blades of Frost, covers Yggdrassil’s annoying summons handedly, no matter where they try to hide on the screen.

Every fight differentiates itself from the last, beyond requiring different elemental grids for success. Ares brings mobility and counters to bear. Rose Queen summons butterflies and vines that require your attention. Proto Bahamut throws down screen-covering, world-ending, health-bar-rendering moves that will send you in search of safe-zones. Most of them are better suited to different skills as well (these unlockable abilities range from damage dealing moves to party-wide healing and instant super-bar refills). Each fight becomes gradually easier and easier as you learn their tells and habits, pick your counters, and evolve your weapon grids. Fights that pushed your limits will end in half a minute and the rewards will pile up.

The gacha draws of mobile games have their stigmas thanks to their ultimately being a form of gambling. Cygames is so giving (in both Granblue Fantasy and Dragalia Lost) that it’s hard to hate them for it, and the prices for draws are so mind-bendingly insane (thirty dollars for a ten-draw?!) that it should be impossible to be tempted.

Granblue Fantasy Versus has draws, just like the mobile game, but there are no characters or summons here. Just weapons for your weapon grid. And, unlike the mobile game, you cannot spend real money on them. You can’t even spend the in-game rupees. You can only trade premium draw tickets for draws, and they’re given as a reward just like anything else from finishing quests.

In other words, you get all of the gacha high with none of the lows. Part of that is because you won’t be crossing your fingers for your favorite characters, but most of it is because none of the predatory business practices associated with them are present.

Every battle is giving you rewards in many ways. You get experience to inch closer to character level 100. You get rupees to help purchase weapons and level them up. You get crafting materials to forge gear (some of which changes your weapon’s look in-fight). You get skill gems to improve your weapons’ passive abilities. And you get premium draw tickets to further bolster your arsenal.

The rewards beget the grind, as they do in all the best grind loop RPGs. The only difference is Granblue Fantasy Versus is a fighting game.

While Granblue Fantasy Versus fails to tell an engaging story, by virtue of being a fighting game spin-off, its grind loop and fun boss fights make it one of the most compelling campaigns in the genre. Grinding Colossus so that you’re better prepared to grind Rose Queen is just one of the steps of working your way up to grinding Beelzebub, and just one example of how the loop feeds together.

Even after you have beaten every stage and gotten an S in every fight, continuing to hone your grid just for the sake of the grind is its own rewarding pastime. Whether you’re going it alone or with a friend, Granblue Fantasy Versus is the fighting game for people looking for an engaging RPG Mode. (Maybe give it a shot if you enjoyed Super Smash Bros. World of Light.)

Granblue Fantasy Versus is available now for PS4 and Steam.

Brutal Gamer's Nintendo Editor began his gaming life a little late- at five years old. But he's made up for it in the two decades since, gaming and writing about gaming with the same passion, fervor, and unrelenting love as his five-year old self.
Previous BG’s Game of the Month for February is Darksiders Genesis
Next 2020’s E3 cancelled, digital presentations possible