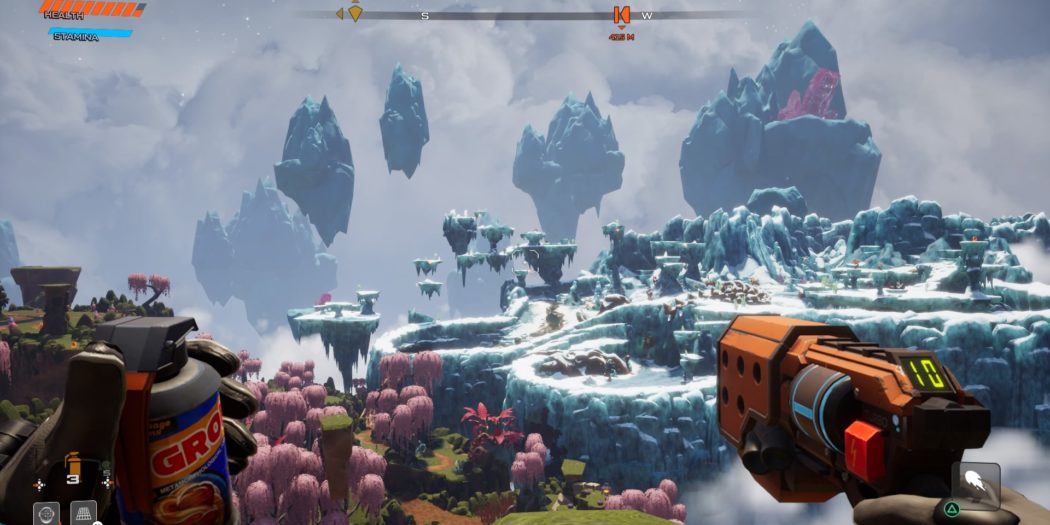 Journey to the Savage Planet is a much more relaxed game than its title would suggest. Few alien creatures go out of their way to strike you down without aggravation, and entire subsets love you. Like, a lot.

It’s too bad you’ll have to splatter their green guts all over your hands.

Your spacecraft has landed on an alien planet with a mission (tasked to you by the 4th best Interstellar Exploration Company): determine if the planet is a suitable home for humanity.

Secondary goals include surviving, making it back home, and watching ads for Grob, Blob Hot Lines, and Mini Mall Monkeys.

The savage planet in question, AR-Y 26 or some other combination and numbers and letters, is a wide open world filled with things to scan, orange goo to digest, and resources to collect and refine into upgrades for your adventurous explorer (mine was a dog).

The world opens itself up to you as you acquire these upgrades. Once distant alien alloys are reachable when you equip yourself with a grappling beam. Alien video logs are simply attainable when you’ve got four jumps and the ability to pound the ground beneath you. And of course, that digestible orange goo (which upgrades your health and stamina) is a cinch to discover with the ability to hold corrosive, explosive, and electrical bombs for extended periods of time.

A day in Journey to the Savage Planet is not unlike many open world games. You start toward your primary mission. Then you’ll see a platforming section off the beaten path. That will take you to a cache of resources, and then notice an enemy type you’ve never seen before. You scan it, fight it, and claim the alien alloy hitherto locked away. From your new vantage point, you see a floating space rock with its own orange goo glob, and you’re certainly not going to leave it there. There’s never a need for a map, because you’ll stumble into everything you need and want naturally.

It’s easy to go for hours without pushing forward in your primary objective, but technically 100% is still an objective.

Unfortunately, that means killing some of your adoring alien pals along the way.

Combat is very simple in Journey to the Savage Planet. It’s first-person shooting, except you only have one gun and a handful of items. The gun doesn’t upgrade into a shot-gun or a machine-gun or anything so fancy. It shoots like your standard laser pistol. With a couple of upgrades, you can charge it to shoot a bouncing bullet bomb.

It’s the enemies that make every encounter exciting. It starts with a handful of Pufferbirds. They’re cute. They’re dumb. They love you a lot. Their bulging, body-sized eyes look at you like the father they never had. But they have the carbon you need in order to progress.

Backhanding them into green alien paste made me guilty. It was a cruel barrier to the rest of the game, a hurdle I had to slap in order to experience AR-Y 26.

I left them alone as much as I could. But then I was assigned scientific experiments. Without completing them, I would never be able to triple-jump, or quad-jump, or take zero fall damage. I took a lot of fall damage, regularly, so sacrifices had to be made.

Kill midair enemies? There was no easier way than to do it with Pufferbirds.

I killed them by the dozens, slaughtering entire flocks until I came back to my spaceship dripping in their glowing green innards.

I discovered just what kind of monster I am. I punted them like footballs to open doorways. I popped them open like pimples for their carbon. I blew them up with the corpses of their alphas.

All so that I could make the platforming a little easier.

Your gun and bombs aren’t the only tools you have when it comes to fighting Pufferbirds and pikemanders and other aliens with glowing orange weak-points. Binding goo keeps foes locked down so that you can blast them where it counts, bait brings the baddies together so you can take them in one shot, and bouncing booger pads pop enemies up so you can focus on what’s in front of you first. Add in your lately-acquired ground-pound for squashing scarabs and enemies that require your constant movement and dodging and even one-gun combat becomes engaging for the 10-20 hour duration of the game.

(I clocked in at just over 14, with about a 90% completion rate; I wrapped up the story, refueled my ship, found every blob of tumor-inducing orange goo, and missed a small handful of alien alloys, scans, and video logs.)

Journey to the Savage Planet is more than just shooting things. Platforming becomes exhilarating when you combine multiple jumps with your grapple and grinding beams. Sometimes you’ll have to grow your own grapple point, midair, so that you can keep yourself from falling to your untimely death. Initially, it can be intimidating, but the rhythm of the platforming and the ample number of jumps make it so that you can fly through the segments without worry and trust that the developer will guide you back to your feet.

Or, worst case, you fall and take a big chunk of damage and maybe die.

Journey to the Savage Planet’s Sense of Humor

Journey to the Savage Planet is not a game to take itself seriously. From the introductory corporate video from Kindred Aerospace’s president, Martin Tweed, and the character select screen (to prove you’re not a robot) (but maybe a dog), to the way your character holds the disgusting items, everything is lighthearted. Birds fart. Your melee is a pimp slap. Major collectibles include diary excerpts from a dying alien (except it’s funny) and ads that play, hilariously and annoyingly, automatically whenever you enter your ship to drop off your resources.

The emails that let you know just how messed up Earth is are a nice touch, too, with the kind of biting satire inherent to the best science fiction.

Best of all is the chiding and occasionally helpful AI voice companion that guides you through your objectives, explores the world with you, and finds humor in your occasional demise and reprinting (“…accurate to 99.1%. You’ll have to die 49 more times before you were technically no longer you at all”).

If anything, there’s not enough. I wanted more emails, more ads for ridiculous, made up vegan-made Wedgie Burgers, more surveys, and more corporate contact from Kindred Aerospace.

The joyfully colorful world of Journey to the Savage Planet is a delight to explore, and while initially the platforming and combat seemed more demanding than I expected, I settled into both without too much trouble. It’s a relaxing adventure, and can be enjoyed entirely with a friend in two-player co-op (by invite-only). Two players can get more out of the various items, sticking each other with binding goo and terrorizing each other with cruelly placed booger pads.

You could work together too, I suppose. You can invite them into your single-player file so that you don’t have to restart when you’ve finally convinced a friend it was worth getting.

A short, dense and digestible open-world (possibly resulting in a body that is 90% tumor) is just what the genre needed. There is no frivolous baggage. Just well-defined, attainable completion.

Journey to the Savage Planet

Journey to the Savage Planet is the perfect length for an open-world adventure, driven forward by its humor and your own natural curiosity. Even when you've refilled your ship, it will be hard to want to leave the savage planet.

Brutal Gamer's Nintendo Editor began his gaming life a little late- at five years old. But he's made up for it in the two decades since, gaming and writing about gaming with the same passion, fervor, and unrelenting love as his five-year old self.
Previous Valfaris (PC) Review
Next Second season of Samurai Showdown DLC revealed