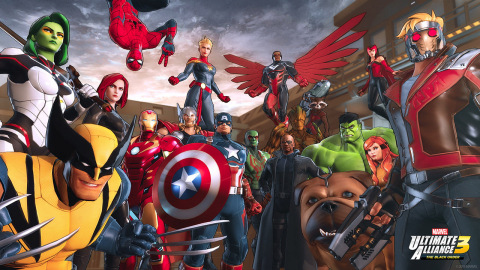 It’s finally here. One of the biggest games of the summer, and the first Ultimate Alliance title in a decade has arrived for Nintendo Switch.

Is there a bigger game this summer than Marvel Ultimate Alliance 3: The Black Order? It’s not Rage 2 or Wolfenstein’s new additions, and it’s not Crash Team Racing either, as fun as it is. The only real competition in terms of being hotly anticipated might have been Super Mario Maker 2, another Switch exclusive.

But I think MUA3 beats even that. It’s been 10 years since gamers have seen this franchise after all, and it was easily one of the best sets of superhero games ever.

Starting with the X-Men Legends games, Marvel Ultimate Alliance was a joy, combining simple, team-based gameplay with lite RPG mechanics and a roster of heroes that was (and is) unbeatable. There’s just nowhere else that you’re going to get this many superheroes together in one game.

Now it’s finally (almost) here, and just in time for Comic Con. As you might imagine too, there are no other triple-A releases for Switch this week. However, the NES virtual console does get Wrecking Crew and Donkey Kong 3, and Redeemer: Enhanced Edition arrives as well. That one looks to be kind of interesting.

Jason's been knee deep in videogames since he was but a lad. Cutting his teeth on the pixely glory that was the Atari 2600, he's been hack'n'slashing and shoot'em'uping ever since. Mainly an FPS and action guy, Jason enjoys the occasional well crafted title from every genre.
@jason_tas
Previous SDCC 19: Dark Horse Comics complete program
Next Danny Ketch is Marvel’s Ghost Rider once more in new monthly