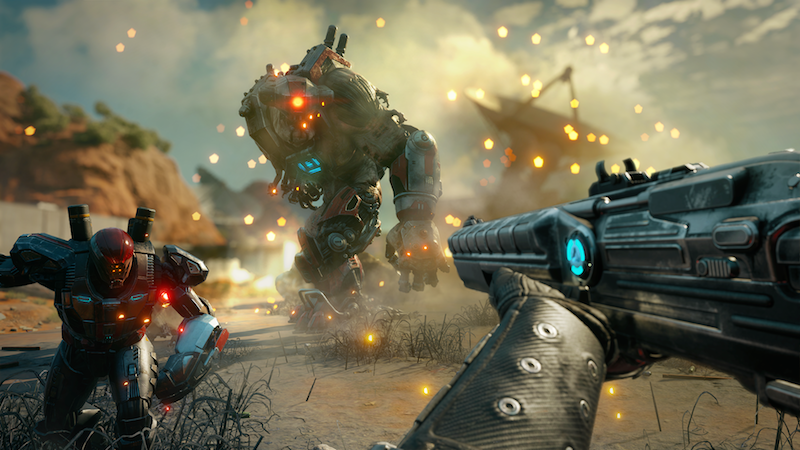 One of the most hotly anticipated FPS’ of 2019, Rage 2 is looking great in this pre-beta footage. Superpowers, a boss fight, and plenty of gunplay is all included.

I liked the first Rage well enough, but Rage 2 is looking like it’s shaping up to be that much better. It’s kind of hard not too though, since Rage was basically just a lot of shooting and driving, without much in the way of innovation. That’s not Rage 2.

Avalanche and iD have expanded the gameplay so much over that original release, that it almost feels like a whole new series.

Aside from the fact that it’s more colorful and visually interesting, Rage 2 just looks more fun all around than it’s prequel. A seemingly better fleshed out, and more “alive”-feeling world aside, R2 looks like there’s just more to do. Not to mention that it’s massive environment is pretty darn impressive.

I’m not much for open world games any more, but what was shown off in that video was just stunning. I have to admit too, that I’m pretty excited about flying around on that hover bike. That’s just neat.

Rage 2 isn’t all that far off at this point either. The game arrives for the PS4, Xbox One, and PC on May 14th.

Jason's been knee deep in videogames since he was but a lad. Cutting his teeth on the pixely glory that was the Atari 2600, he's been hack'n'slashing and shoot'em'uping ever since. Mainly an FPS and action guy, Jason enjoys the occasional well crafted title from every genre.
@jason_tas
Previous LEGO Marvel Collection coming to consoles
Next Episode 57: Crash Team Racing is Bad