Is one of Marvel’s most bizarre characters about to meet his end? Well, the Hulkverine is up against the original Hulk and Wolverine, so probably.

The legends are back 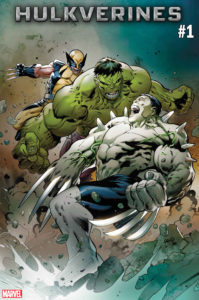 Back in action after being… dead, Wolverine is ready to tackle a pretty big challenge. It’s a good thing then, then he’s got a pal along for the ride with the Immortal Hulk. Maybe “pal” is too nice of a word. Either way, the two will be taking on Marvel’s mashup character of Weapon H in February’s Hulkverines.

What is more dangerous than a creation made of a combination of Adamantium claws and gamma blood? The predecessors of Weapon H – Wolverine and the Hulk!

This February, Marvel’s two fiercest heroes are teaming up in a three-issue miniseries that will see them coming after the dangerous creation made in their name. Writer Greg Pak — a man who knows all three characters quite well — is teaming up with Weapon H artists Ario Anindito (for #1 and #3) and Guiu Villanova (for #2) to bring you HULKVERINES!

It’s an action-packed adventure that you won’t want to miss, and it’s coming to Marvel this February!

Jason's been knee deep in videogames since he was but a lad. Cutting his teeth on the pixely glory that was the Atari 2600, he's been hack'n'slashing and shoot'em'uping ever since. Mainly an FPS and action guy, Jason enjoys the occasional well crafted title from every genre.
@jason_tas
Previous Coming up: The games of November 2018
Next Metro Exodus’ Spartan set is one loaded Collector’s Edition