Men in Black meet the Ghostbusters in new IDW board game

Two fan-favorites are meeting for one big adventure in IDW’s latest. In it, the Ghostbusters and the MIB will face an Ecto-terrestrial Invasion.

As cool as it is unexpected, IDW’s latest board game is timely as well. We;ll, the announcement of it is timely anyway, as both Men in Black and Ghostbusters fit this time of year quite well. As for the launch of the actual game, that’s still a ways off. Nonetheless, it’s sounding pretty awesome. 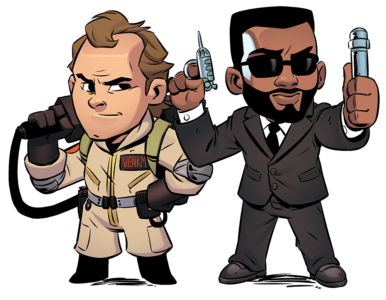 Currently under development, Men In Black/Ghostbusters: Ecto-terrestrial Invasion will be a miniatures loaded board game featuring the world’s foremost protectors teaming up to take down a threat unlike any they have faced before. Making up the Ghostbusters team will be Peter Venkman, Egon Spangler, Ray Stanz, and Winston Zeddmore, and the MIB team will consist of Agent J, Agent K, Agent L and Zed. While these two teams have faced unearthly threats before, the strength of the Ecto-terrestrials is nearly overwhelming, but that doesn’t mean there can’t be a little friendly competition.

While I’m not in love with the cutest, SD art style, I’m pretty excited for this game. Officially titled Men In Black/Ghostbusters: Ecto-terrestrial Invasion, the game is set to be a fast-paced play. Presumably too, there’ll be plenty for fans of both properties to dig into. I say that like there are fans of one or the other. But really, who isn’t a fan of both? I’m sure there’s plenty of crossover.

You just might be playing this one around this time next year too. IDW says that they are looking towards a “late 2019” release. Also worth noting, is that solo board games are in development right now for both as well. Lots to like, coming up.

Jason's been knee deep in videogames since he was but a lad. Cutting his teeth on the pixely glory that was the Atari 2600, he's been hack'n'slashing and shoot'em'uping ever since. Mainly an FPS and action guy, Jason enjoys the occasional well crafted title from every genre.
@jason_tas
Previous No Man’s Sky’s “The Abyss” expansion looks like a whole new game
Next Genesis Classics release date finally revealed for Switch, hits in December