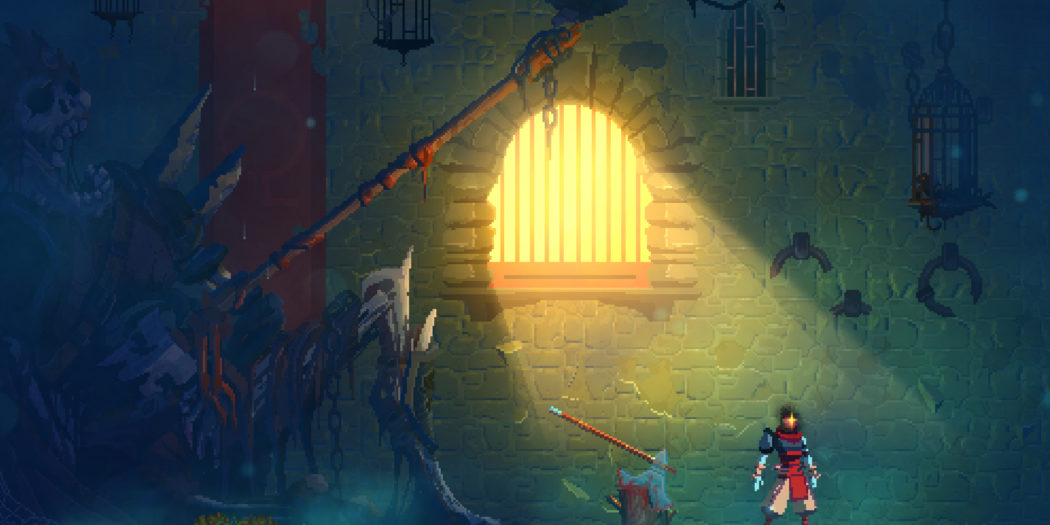 A tough, procedurally generated Metroidvania that’s as much fun in your 100th run as your first, Dead Cells is a must play.

I have to admit that I didn’t know a whole lot about Dead Cells when I took the game on for review. Sure, it looked great from some of the imagery that I’d seen, but that was almost all that I knew about it. And I have to add too, that I had some second thoughts when I fired it up for the first time.

Here’s the main thing: I do not like rougelikes. I like scripted games, with well-designed levels and details. That’s stuff that procedurally generated stuff just can’t ever seem to get right. There’s a reason for that of course, since a game that’s basically randomized can’t do some of what I just pointed out. Or… can it?

Get ready, because Dead Cells is not only about to bust your preconceptions of what a rougelike can be, it’s also one of the best games of 2018. 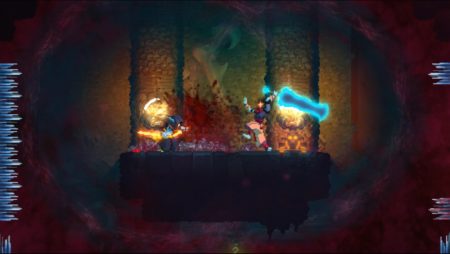 The story behind Dead Cells is a simple one, at first anyway. You play as a prisoner, who’s been put to death in a mysterious prison packed with monsters. Yes, that’s right, you’re already dead when the game starts. Somehow, your character is brought back to life via a mysterious… muck. He’s reanimated, and looking to bust loose. Of course, he’s also kind of got no head, but that’s another story.

The above is more or less all that you’re loaded up with, story wise, at the start of the game. Though the narrative certainly doesn’t stop there. As you play, you’ll pick yup all manner of clues as to what’s actually going on on the island you have found yourself bound to.

Story points are told through discovered notes and scripted encounters that you will come across as you play. Yes, I said “scripted”. Not everything in Dead Cells is procedurally generated, and there are more than a few really cool scripted moments in the campaign.

And these moments carry over, sometimes repeating (though that’s always acknowledged) and sometimes having repercussions across different play-throughs. 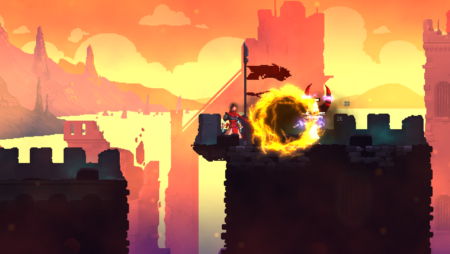 See, you cannot die in Dead Cells. Not really. Instead you’re brought back to life every time you croak, and find yourself back in the starting chamber – and back possessing the same body. It’s true no matter how far you might think you’ve gotten in the game, and when you re-start you will have lost all of your weapons and upgrades. This starting area is the same too (or similar anyway) every time you find yourself back in it, but the rest of the game is different.

The levels play out in completely altered fashion, right down to where you go after you beat a section. It’s all different. The cool part? It’s also all a part of the story. The random nature of the game isn’t something that’s solely there as a mechanic of the genre, it’s actually a part of what’s happening to the main character and his world.

As I mentioned however, you won’t have any of your stuff. You’ll be starting over, almost completely. There is a trick to it though.

While you play, you’ll unlock weaponry, items, and more.

All of this then starts becoming available to you, to either buy or find in levels. You’ll also learn what mutators are best to equip yourself with when you run across the merchant. Mutators can alter some aspects of your character, I usually get the one that gives you a second life (not as useful as it sounds).

Oh, and there is one element that you’ll actually hang onto from life to life too. That being the runes. 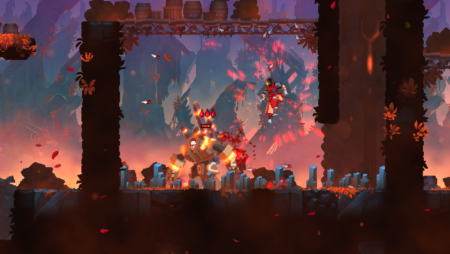 Runes give you powers over certain background items in the game. Little piles of slime can be triggered into growing into powerful vines, sarcophagi can be used as teleportation devices, and so on. When you star the game fresh, you won’t know that, and some things won’t make sense to you, but as you progress, you get these new abilities, and things start to really open up.

Speaking of- yes, you do feel like you’re progressing. All of the above gives you a sense that you are definitely getting somewhere, even though you keep re-starting. It’s absolutely delightful, and makes for one of the few rougelikes that I’ve actually enjoyed thoroughly.

Part of why the game is so much fun too, is the look and overall design. Dead Cells is pretty. While the game definitely is what I’d call “retro-inspired”, it’s not stuck in the 16bit era at all.

While things are pixely, the effect work at play is flat out gorgeous. Developer Motion Twin has crafted a world that’s a dream to look at and play through. While you won’t find any of modern gaming’s shock and awe moments here, Dead Cells is about as good looking as it can possibly be. I kind of liken it to the Switch’s Octopath Traveller in that way. It’s like an idealized evolution of the classic 16bit Metroidvania. And, you know, random too. 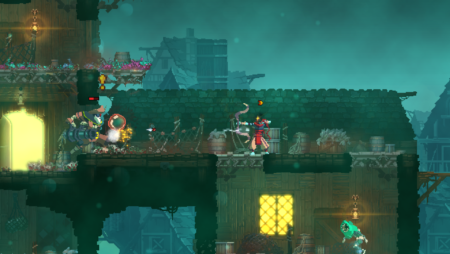 Just how Motion Twin managed to get all of the insane detail into this game, while still keeping the main convention of a rougelike though, I have no clue. But Dead Cells feels and plays like a fully scripted game, every time through. The game is stunning and that’s true from the levels themselves, to the enemies.

There are quite a few baddies to beat in Dead Cells, and almost all of them are cool. Even lowly zombies have an eerie green glow to them (and they’re honestly quite dangerous too). The animation and design of the enemies in the game are top notch. You can tell that an amazing amount of care was taken. As a player, it’s appreciated, since obviously there were no corners cut.

Dead Cells also sounds great, and that’s a rarity. The music score is excellent, setting the mood perfectly across the varied locales, and the effects are great. All of this, serves to backup what’s a stellar playing game.

So the main gimmick in Dead Cells revolves around coming back to life. And believe me, that’s something that you’ll be doing a lot of.  This is not an easy game by any means, though it’s one that you will never feel is unfair or “cheap”.

The control in this adventure is excellent. Your prisoner can attack with swords, arrows, and even a pair of sandals (with a good kick). You’ll also be able to leap around, defensively roll, and toss items like grenades and traps. All of that comes with ease, and can be used together to create a fighting machine once you get the hang of things… which comes with rebirth.

Throughout the times you reincarnate, you’ll learn how best to handle certain things, how to beat different enemies, and what weapons and items are your go-tos. And I know it probably doesn’t sound this way, but you’re going to enjoy almost every minute of that process. 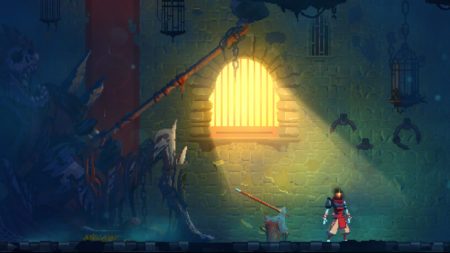 These can be swapped for upgrades and unlocks from a merchant that you’ll run across. I can’t appropriately relate how maddening it is when you have a ton of these collected and then get killed either. Yep, you lose all that you haven’t spent when you have to begin again. It’s one of the rare things in Dead Cells that’s not enjoyable. Heck, even starting over is somehow fun.

That’s because the game has a tremendous sense of progression, and always makes you feel as though you’re making headway, even when you restart. Again, there’s some kind of magic baked into this one. It really is that good, and I feel like I can say with some certainty that anyone who is into side-scrolling Metroidvanias will at least find something to like here.

And for those that it really clicks with? Well, you might have just met your latest gaming obsession.

Land of the dead

Classic looks, with all the modern niceties - 91%

There isn't much to dislike about Dead Cells, even for someone who's not into the random nature of a rougelike. The game is stunning in terms of graphics and animation, sounds amazing, and plays great. Plus, it's chock full of the little details and fun elements that make the Metroidvania genre as long-lived as it is. This is a gem, plain and simple.

Jason's been knee deep in videogames since he was but a lad. Cutting his teeth on the pixely glory that was the Atari 2600, he's been hack'n'slashing and shoot'em'uping ever since. Mainly an FPS and action guy, Jason enjoys the occasional well crafted title from every genre.
@jason_tas
Previous Nintendo’s Switch Online services priced, officially launching next month
Next Call of Duty: Zombies #1 (Comics) Review