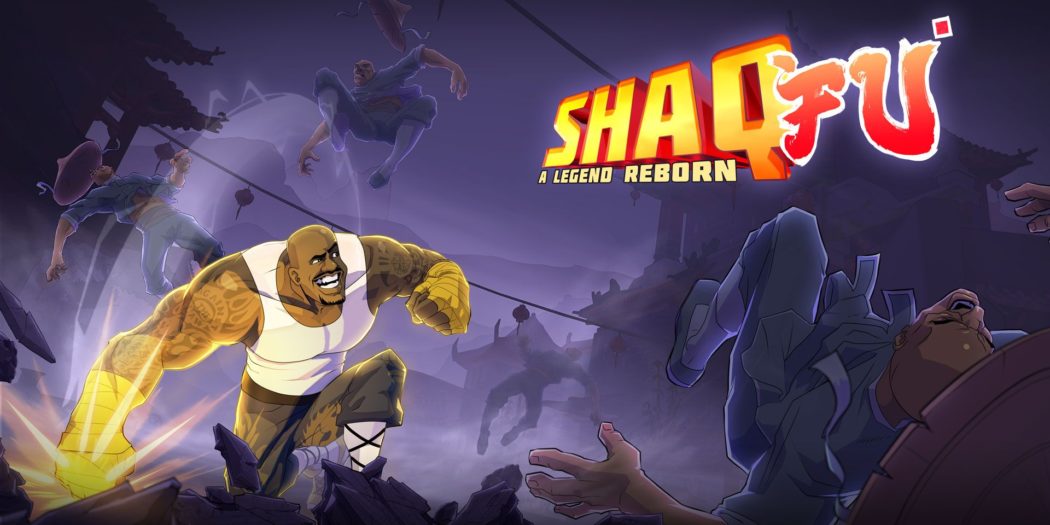 “The world is on the brink of disaster. Our biggest celebrities have revealed their true faces — demons intent on moronizing the public to assume control of the planet. Only one man can save us: a towering Chinese orphan named Shaq Fei Hung. Trained by a kung fu master, Shaq must journey to the most perilous corners of the world to fight evil and realise his destiny as the chosen one. Shaquille O’Neal returns to “settle the score of ‘94” in this complete reimagining of the Shaq Fu legend. Players take control of the unstoppable Big Diesel as he brawls his way through the hordes of Hollywood and Hell in classic side-scrolling beat ‘em up style.”

Yes, that is as ridiculous as it sounds. This is probably a game we never thought we’d hear quietly murmured about again. But, through the power of Indiegogo, Shaq Fu is reborn. With the original deemed one of the worst games ever, A Legend Reborn aims to get that bad taste out of your mouth once and for all. And for the most part succeeds.

And for those of you wondering, yes, that really is the real Shaquille O’Neal 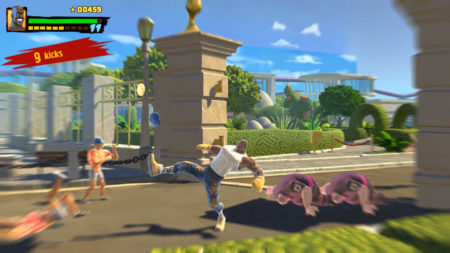 They’re Not the Same

I won’t be comparing the two games however as they are both completely different, with different developers.

A Legend Reborn plays as a side scroller beat ’em up. And does so very nicely. The game will take you through your China Hometown, through Hollywood and all the way to hell. Of course.

As far as the gameplay goes it’s about what you would expect. Run right and hit people, either with regular attacks, Shaq’s size 22 boots or a ground pound. Portions of the game will give you one of 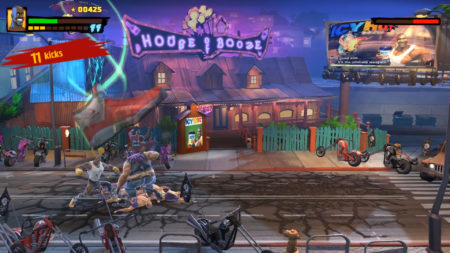 two powerups. These introduce a section of the level where its basically just waves. You have to defeat 100-200 enemies with the powerup until you can advance. These make for fun gameplay but obviously can get rather repetitive. Of course what would a sidescroller beat ’em up be without weapon pickups? As you go along you’ll use signs, sword things and more to beat down multiple enemies at once.

Boss fights also make an appearance. Some you don’t even notice when they happen. But of course you get the main ones which have cutscenes and story building and weird demon morphing. For the most part they follow the rest of the games simplicity. The final boss fight feels like it will have several stages to it but alas, she just repeats the same three movements over and over. Repetition is strong here, but it’s still fun enough to not get tiresome.

As simple as it is, the fighting is a lot of fun. Especially when you boot someone straight into the screen. The game is filled with 4th wall breaks like this. It felt rather Deadpool-esque, and that is definitely a good thing. On that note, the style of humour is something I was not expecting. Obviously I was expecting it to be silly and exaggerated, but the content of the jokes were not what I would’ve thought.

Those With Sensitivities Look Away 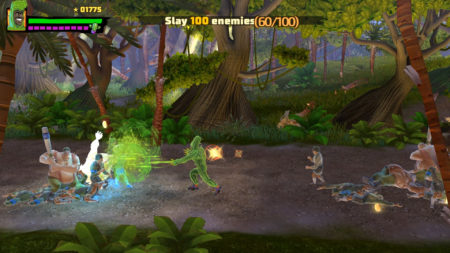 The Comedy in Shaq Fu seems as if they’ve aimed to offend as many people as they can…and it’s glorious. I myself have no boundaries when it comes to comedy. The more offensive the better I say. I can definitely see some people getting upset with Shaq Fu however. That’s especially true in the super sensitive world we currently live in. But for those of you that like to laugh, you certainly will here.

My only real issue with Shaq Fu is it’s length. You’ll get a good 2-3 hours out of it. On medium. Though with the repetitiveness in mind, this is probably a good thing. If you’re in the mood for just a silly fighting game to kill some time, then Shaq Fu should fill that quite well. It could have done with another game mode or levelling up. Something to make you come back to it more. As it is, you’ll play it once and probably forget about it. But at least you’ll enjoy it while you do.

Don't expect to be in this for the long haul or be challenged at all. What you've gotten yourself into is a quick beat 'em up. Nothing is wrong with the game, but it doesn't do anything new or different. It's enjoyable, funny and bug-free. Worth picking up when it's a bit cheaper. It really is too short for the price. That's the only real criticism here. Other than that, it's a solid beat 'em up game.

Massive game and movie enthusiast. In any free time I'm always playing something or watching something. I didn't choose the hermit life.
Previous E3 2018: Destiny 2: Forsaken’s Gambit brings a little PvP to PvE
Next Tony Stark: Iron Man #4 puts a new romance in the spotlight – with the Wasp