Spidergeddon is coming to Marvel Comics

Spidergeddon! The very term send shivers down the spine. The fear, the terror, the horror, the… actual we have no idea what Spidergeddon is. But it certainly seems like it’s going to be yet another big Spider-Man-centric event from Marvel Comics.

The end of Spidey?

No, I don’t think that’s what this is about exactly, but I couldn’t think of a good sub-heading. So that’s what we’ve ended up with. Honestly, I don’t exactly know what Spidergeddon is about and Marvel isn’t helping. 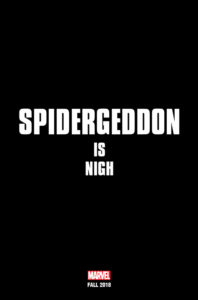 The company has released this teaser image, but nothing else. And as teasers go, it’s stunningly barren. Not that that’s anything new, as Marvel has made a habit of teasing stuff over the last few years, and some of it’s been pretty bare. Nevertheless, this leaves us with some good old fashioned speculation.

So what could Spidergeddon be? Well, it could be a thinning of the heard for the spider-themed characters in Marvel’s universe. I’ll go out there and say that there’s little chance it’ll be the “death of Spider-Man”, but it could be the death of Silk, or Scarlet Spider, or Kaine. Or maybe all of them.

Could it be that grim of an event? As a long time Spidey fan, I wouldn’t mind it one bit. Also worth remembering is that Fresh Start (which we’re in the midst of) is a kind of return to the iconic heroes of the Marvel U. So Spidergeddon could maybe be a crossover aimed at getting things down to just Spider-Man (and probably Miles too) once again.

As it stands right now, the only thing that we’ve actually got is a release window. So for now, it’ll have to do that can watch for Spidergeddon to rear it’s (possibly) ugly head some time this fall.

Jason's been knee deep in videogames since he was but a lad. Cutting his teeth on the pixely glory that was the Atari 2600, he's been hack'n'slashing and shoot'em'uping ever since. Mainly an FPS and action guy, Jason enjoys the occasional well crafted title from every genre.
@jason_tas
Previous DC announces slate of artists for new Sandman Universe
Next Hyperkin Duke Controller Review