The next update for No Man’s Sky, which is a major revision of the game, will indeed include some much asked for multiplayer. We’ve got some details on that, plus the actual release date.

One of the biggest criticism’s from the original launch of Hello Games’ No Man’s Sky was the lack of a multiplayer mode. Almost everyone seemed to have been under the impression that one was included. Yet there sure wasn’t one when it shipped for the PC and PS4. Fast forward a bit though, and we’re finally getting on track.

The new mode will be included in the update called No Man’s Sky NEXT. That’s also set to be the new retail box edition of the game, which will launch for the Xbox One. Of course, if you have the game already on one of the previous platforms, you’re getting this all for free. This is an update, not DLC.

“Multiplayer completely changes the No Man’s Sky experience, it’s emergent, fun and intense in ways we always wanted it to be. I’m so happy this is finally happening” said Sean Murray, founder, Hello Games. “It is genuinely exciting to be able to fully realise the potential so many people could see in No Man’s Sky. This will be our biggest update yet and we’re pumped to be bringing Xbox players along on the journey with us now too.” 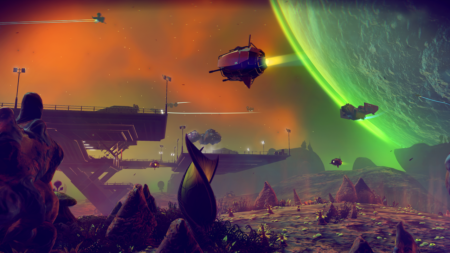 As for the full set of inclusions in the NEXT update, these’d be them:

As you might imagine, No Man’s Sky NEXT for the Xbox One will include more than NEXT. The game will also come with the previously released updates as well. So you’ll get Foundation, Pathfinder, Atlas Rises, and a bunch of other fixes, patches and whatnot.  Everything will be up to date, right from the jump.

As for the actually launch, Hello Games revealed that today too. Expect to see NEXT hit the Xbox One, as well as the PS4 and PC, on July the 24th in the US, and on the 27th in Europe.

Jason's been knee deep in videogames since he was but a lad. Cutting his teeth on the pixely glory that was the Atari 2600, he's been hack'n'slashing and shoot'em'uping ever since. Mainly an FPS and action guy, Jason enjoys the occasional well crafted title from every genre.
@jason_tas
Previous The Witcher gets the Library Edition treatment at Dark Horse
Next DC announces slate of artists for new Sandman Universe