Home / Comics / Who is Requiem? You’re going to find out, in Marvel’s Infinity Wars #2

Who is Requiem? You’re going to find out, in Marvel’s Infinity Wars #2

Is Requiem the main baddie of Marvel’s latest crossover event, Infinity Wars? We don’t know just yet, though we’re apparently going to find out plenty about the enigmatic new character in Infinity Wars #2.

Requiem for an Infinity stone

This summer, prepare to learn the answer to the question that everyone has been asking…who is Requiem? Acclaimed creators Gerry Duggan (Deadpool) and Mike 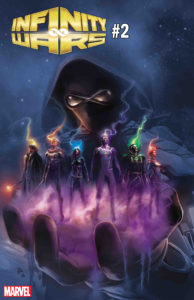 Deodato Jr. (Old Man Logan) are bringing you an Infinity Stone story that will change the Marvel Universe…and the lives of those who wield the cosmic stones!

Who Is Requiem? Find out in INFINITY WARS, in comic shops this August!

It’s been so far, so good with Infinity Wars. Or, at least, it has with the lead-in to Infinity Wars. Countdown is proving to be a compelling read, with a story that’s been ramping way up from a somewhat ho-hum first issue. All of that leads into Infinity Wars proper, which will hit the Marvel Universe over the summer.

And the main villain of that, will be… well actually we don’t really know. Both Thanos and the mysterious Requiem have been shown as what looks to the antagonists, though the latter was shown in an image that had a heavy connotation that Thanos was not necessarily with the hooded figure.

Again though, so far, so good. If you’ve been missing out, Infinity Countdown is up to issue #3, and has a fourth on the way this month. Infinity Wars kicks off this August.

Jason's been knee deep in videogames since he was but a lad. Cutting his teeth on the pixely glory that was the Atari 2600, he's been hack'n'slashing and shoot'em'uping ever since. Mainly an FPS and action guy, Jason enjoys the occasional well crafted title from every genre.
@jason_tas
Previous First look at this summer’s Mission Impossible: Fallout arrives
Next Britannia: Lost Eagles of Rome #1 (Comics) Preview