Home / Comics / The Amazing Spider-Man #3 gets weird with Spidey vs… Peter Parker?

The Amazing Spider-Man #3 gets weird with Spidey vs… Peter Parker?

With a fresh run just about here, Marvel is already talking up the third issue with a pretty oddball teaser. The Amazing Spider-Man #3 will reportedly somehow feature a battle between Spider-Man and his alter ego, Peter Parker. 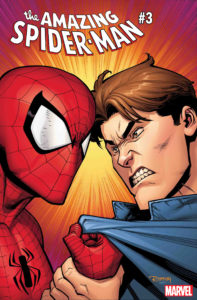 There’s a few different ways this one could be heading, especially considering comments from writer Nick Spencer.

“The best Spider-Man, his personal [trouble] is mirroring his troubles in costume, and the two stories are feeding each other and being Spider-Man always comes with considerable costs to Peter,” Spencer told Comicbook.com. “It’s always getting in the way of his life. So, to me, it’s kind of a dance between those two things at this stage.”

So will this be an actual fight between the webbed-wonder and the average Pete from Queens? Or might this be a metaphorical one-on-one instead? Maybe another go at the oft visited Spider-Man trope of Peter wanting to be “done” with the hero game? If it is, I have a feeling how it’ll be playing out.

Again though, this is a teaser for issue three, and we’ve got a little ways to go till we get to this arc. After all, we haven’t even gotten to #1 yet. That issue is set to arrive on the racks in two months time, post-Red Goblin and writer Dan Slott’s departure.

Watch for it to arrive on July 11th, from Spencer and artist Ryan Ottley.

Jason's been knee deep in videogames since he was but a lad. Cutting his teeth on the pixely glory that was the Atari 2600, he's been hack'n'slashing and shoot'em'uping ever since. Mainly an FPS and action guy, Jason enjoys the occasional well crafted title from every genre.
@jason_tas
Previous Full Rage 2 trailer has the game looking loud, violent, and monstrous in scope
Next Another Zelda tome set to join Dark Horse’s line with Breath of the Wild art book