How many winners will there be in Infinity Wars? Quite a few apparently. First a “Thanos Wins” teaser hit the other day, and now we get a look at a combat-ready Death. And she is apparently also quite victorious.

Death comes for all

It might be reasonable to assume that this is “Death” herself that we’re seeing in this promo pic for Infinity Wars. After all, she’s been intwined with Thanos since the original Gauntlet. So for this go at an Infinity storyline, it’d probably be a safe assumption that she’s back.

It’d also be kind of a safe thought to think that she’s in league with Thanos. And if he wins, so does she. So might this be a teaming of the Mad Titan and the force of nature? Maybe, but take a lok at the glove that’s impaled on Death’s blade. That’s pretty obviously Thanos’. Though again, this is all conjecture.

There are no details on IW(s) right now. All we have to go on, as to story hints, are these teases and the Countdown book that’s currently running. 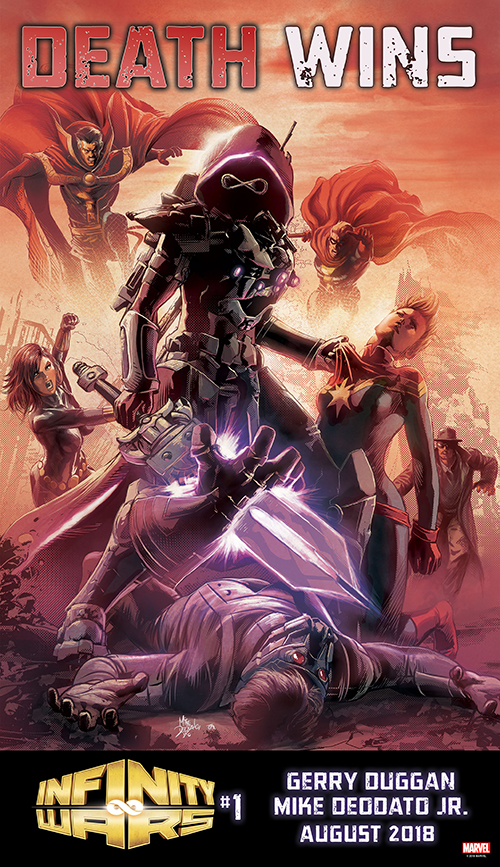 Jason's been knee deep in videogames since he was but a lad. Cutting his teeth on the pixely glory that was the Atari 2600, he's been hack'n'slashing and shoot'em'uping ever since. Mainly an FPS and action guy, Jason enjoys the occasional well crafted title from every genre.
@jason_tas
Previous Fresh heroes added to DC Collectibles’ new Artists Alley vinyl figure line
Next Evil Dead virtual reality game inbound for mobile platforms