Fear Effect is back on the Nintendo Switch and the other 8th generation consoles. The last we saw of Hana, Rain and the gang was ironically in the prequel Fear Effect 2: Retro Helix. Originally, a third game titled Fear Effect: Inferno would have been released for the PlayStation 2 but it was canceled. I was originally sad that Fear Effect was, in effect, over but Sedna is the sequel that fans both deserve and need.

The original Fear Effect games were horror titles that were probably best characterized by cel-shaded characters and FMV backgrounds. Fear Effect Sedna is a direst sequel to those, played on an isometric point-of-view. Much of the game remains faithful to the prequels as well. Returning elements are plentiful. Those include puzzle-solving, stealth, and Hana and Rain using their wits to get out of unreasonably difficult scenarios.

One of the funniest features of the original Fear Effect games is that the characters can literally die from shock or fear. It was, and is still, pretty unique. While that feature does not necessarily return in Sedna, the characters are instead *treated* to some very creative ways to die.

Characters can die from anything from an exploding puzzle, to a gunshot straight to the face. We get it, being a spy is a gritty, violent job. But Fear Effect Sedna places the player in scenarios where they’ll have to make split-second decisions.

Honestly, Fear Effect Sedna is something that I judged incorrectly. Originally, I thought Sedna was a watered-down version of the original Fear Effect games, but I was wrong. It is different, there’s no argument there. But I felt intrigued by the relationship between Rain, Hana and their motley crew of former soldiers and spies. I also felt afraid to make mistakes, and I certainly hated every single time I got Hana or Rain killed.

More over, I loved every minute of the game when it frustrated me. That’s right, I actually enjoyed being stymied by it. One of Fear Effect’s staples are the ever-present puzzles after all. Utilizing a much smarter game engine than before, Sedna offers more intuitive and yet vexing puzzles. And wow does that make the game fun. Well, if you’re into that, that is. I could definitely see those that might be more easily frustrated have their fill of Sedna’s ways rather fast. 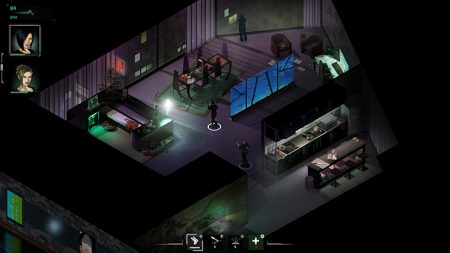 But I don’t want to make this title sound like it’s solely a puzzle game either. It is quite violent as well, though Sedna is also intelligent and classy. Think of it as the middle-ground between Mission Impossible, James Bond, and… Silent Hill. This is a sexy thriller that doesn’t solely rely on its characters’ visual appeal. Sedna goes so far as to even take advantage of the characters’ part-time jobs and the scenarios they find themselves in in order for their personalities to appeal to the players.

Voice Acting, Graphics and all that Jazz

Living in the world of Fear Effect can make one feel pretty classy. It’s the 2040s and industrial espionage seems to be all the hype in the world. Everyone has a secret and everyone is mysterious.

If it wasn’t for the effective storytelling and talented voice actors, the game would have become very different and it could have felt very pretty damn cheesy. Luckily, the developers who took over from Eidos and Square Enix respected the original source material. They clearly took making Fear Effect Sedna as accurate and as sexy as possible pretty seriously.

Fearful, but in a good way

Though this is very much part of the series, you don't need to play the original Fear Effect games in order to appreciate Sedna. However, the eighth generation sequel is an unforgiving game with minimal tutorials and it certainly won't tell you how to solve the game's many puzzles. It's a great, mature game to play and it definitely looks great on the Switch.