Home / Action Figures and Toys / Mezco’s One:12 Collective Ghostbusters finally go up for pre-order as a box set

Mezco’s One:12 Collective Ghostbusters finally go up for pre-order as a box set

A five pack of Ghostbusting goodness? The One:12 Collective’s latest is a five pack, including all four ‘Busters and Slimer. And yes, it’s finally available for pre-order.

Who you gonna call

This one’s been cooking for a while. And I mean like, a while. It seems like years since Mezco announced that they’d be including the classic Ghostbusters in their excellent One:12 Collective line of action figures, and now they’re finally here. Though, this arrival might not be quite what you had assumed. 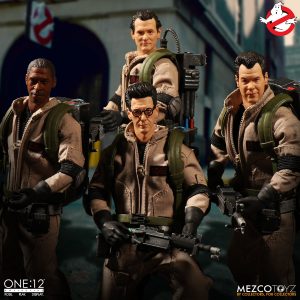 I don’t think I’m alone in thinking that the Ghostbusters would be arriving in the line as separate figures, each in their own collector box. That was kind of hinted as not being the case though, and at this past Toy Fair it was confirmed that Peter, Ray, Egon, and Winston would be coming home as a set.

Now we have the full details on that set, and it’s pretty impressive. Not only will fans get al four main characters, but they’ll also receive a bevy of accessories (natch’) four light-up proton packs, and Slimer too. Thats a nice little collections, and given the line’s detail level, a centerpiece for anybody’s GB set-up.

The set will start shipping out this year, in the October to December timeframe and will run you $300 USD.

Here are the particulars:

The One:12 Collective Ghostbusters figure is packaged in a deluxe metal tin, designed with collectors in mind. There are no twist ties for easy in-and-out of package display.

Jason's been knee deep in videogames since he was but a lad. Cutting his teeth on the pixely glory that was the Atari 2600, he's been hack'n'slashing and shoot'em'uping ever since. Mainly an FPS and action guy, Jason enjoys the occasional well crafted title from every genre.
@jason_tas
Previous PC classic Titan Quest lands on consoles, Switch version incoming
Next Deadpool: Assassin #1 (Comics) Preview