Nightwing is getting a major new story direction this May, as Benjamin Percy takes over. Get ready for some very big new threats as The Bleeding Edge kicks off.

I have to admit that I’m not familiar with Percy’s work. Not that he’s not had a ton of it, I just haven’t read Green Arrow or Teen Titans as of late. And I can’t say I remember him from Detective Comics either, as he had a two issue guest run on the Bat-family book. 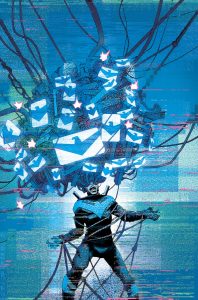 But all the same, I’m liking where he’s taking Dick Grayson in Nightwing. The writer will take over the monthly book as of issue #44.

“Consider how Gotham and Blüdhaven are shadow-soaked, crime-ridden environments,” explains Percy. “One of the things I love about Nightwing is his irrepressible optimism. This joy—a love of the game, a showman’s theatricality—is tonally essential to my approach. I see it as a necessary counterweight to material that might otherwise feel oppressively grim. In this way, Grayson really captures the hopeful maxim that has defined the Rebirth era.”

In this arc, change is on the horizon when a new technologist sets his sights on Blüdhaven, creating a holographic, interconnected city where everyone is an individual and part of a larger network. It’s the internet made physical. Gentrification on gigabyte-laced steroids. But when this new utopia encroaches on his turf, Nightwing starts to uncover a sinister plot based not on revenge…but on a reckoning.

If you’re wondering about art, penciler Christopher Mooneyham will be joining the team. “He’s got a tight line, cinematic vision, and can ground one moment in emotional realism and elevate the next to eye-popping levels of super-heroic awesomeness,” shared Percy.

Nightwing #44 lands on the racks this May the 2nd.

Jason's been knee deep in videogames since he was but a lad. Cutting his teeth on the pixely glory that was the Atari 2600, he's been hack'n'slashing and shoot'em'uping ever since. Mainly an FPS and action guy, Jason enjoys the occasional well crafted title from every genre.
@jason_tas
Previous Marvel reveals the cover of Black Panther #1
Next Nintendo Download: Waka Waka Waka