Hellboy Krampusnacht is a short, 34 page comic where Hellboy faces off against the goat-headed Krampus. While the art style is stellar, the short length of the comic leads to the story and dialogue falling flat.

Hellboy, our half-demon “prince”, is drawn near to a cabin in the woods where he sees a ghostly mother asking him to save her son. Upon disappearing, Hellboy sees a toy elephant in the snow and beyond, the cabin where Wilhelm Schulze, the supposed Krampus, lives. 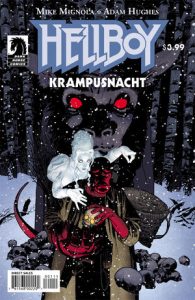 The story is very predictable but understandably the comic is so short so the time to fit any amount of story telling or dialogue is severely limited. The story ends up being very simple and only slightly interesting. The fight is the key appeal and must take a good portion of the story otherwise what’s the point?

Our gruff MC does the usual except not as witty as we hoped he’d be. Since the comic is so short, there wasn’t much to say it seems.

A demonic goat man as expected which has a short session of fisticuffs with Hellboy. Krampus’ motivations took me by surprise. I thought it was a neat minor twist although I had my minor gripes about it being a bit out of place.

Really great in some places and really lacking in others. The colors and details are popping and most of the framing is good. The use of highlights from the lighting on the characters is well done and sets these great tones for scenes. But then there is this scene where our characters are holding a piece of parchment with an illustration on. The illustration appears in 2 panels, well-drawn and colored appropriately. Then, in the next 2 panels, the illustration has been horrifically, digitally inserted, scaled and colored the wrong color for some reason! This leaves 2 panels worth of pure amateur technique souring a well drawn comic so far. There are other places where, if only there was a finer touch, a little more consideration made, it would have looked great or finished off the panel. Instead, some panels became rather artificial and sterile.

Hellboy Krampusnacht is a short, rather uninspired comic where the art is the main driving point as to why you’d read it. The story and dialogue is OK at best and at the very least has some interesting ties to other myths and traditions surrounding Krampus.

Megan here! I am pretty well versed in all things weaboo and geek. I've loved videogames since I was born and even made my own for my 3rd year of Multimedia at the University of Pretoria in sunny South Africa. I have enjoyed anime from the days when Pokemon was considered satanic and Aniplex used to exist on DSTV. In the past couple years I have really gotten into manga, particularly Berserk to see where the story headed after the original anime. If there's one thing I will always love 110% it is cats. Don't doubt my faith in my love for felines.
Previous Dark Horse’s Silver FCBD book will run with ARMS and Korra
Next Nintendo Download: Happy Holidays!