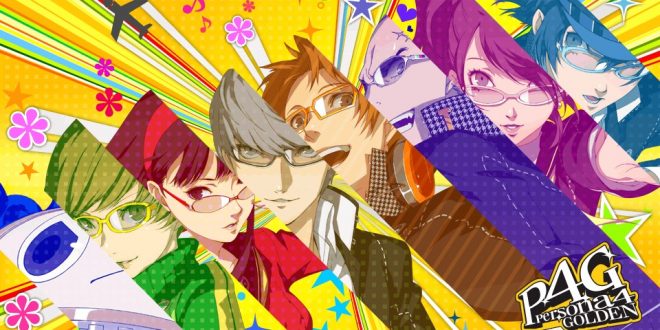 Persona 4 Golden continues to be a popular title for the PlayStation Vita. In this interview, Erin Fitzgerald discusses her role as Chie Satonaka and experiences in the acting industry.

A new direction for the character of Chie

Persona 4 was originally released for the PlayStation 2 back in 2008, and in that version of the game, Chie was voiced by Tracey Rooney. Fitzgerald explains the process of how she was approached for the role.

“It’s one of my favourite stories actually in terms of getting cast in something. So the way it worked is that they already recorded the Persona 4 game with Tracey, and the producer of the localization Yu decided when they were making Persona 4 Golden that Tracey’s interpretation of Chie was a little more mature than what they really wanted for the character,” Fitzgerald said.

Fitzgerald stated that when Persona 4 was originally recorded it was more of a ‘getting to know you’ period since they didn’t know the character. “When they got to Golden they realized that they wanted her to be more teenager-esque, and if I remember correctly they brought Tracey in and gave her the option whether she wanted to do that or not. She tried to play around with it, but she’s an on-camera actress she’s not a character in terms of how I’m a character actress. She’s a leading lady type of actress, so it wasn’t in her pocket to go younger and wackier with the character,” Fitzgerald said.

To Fitzgerald’s understanding, she says Tracey chose to walk away from the role of Chie, and it was a mutual agreement between her and the producers. “I haven’t spoken to her personally, but there were no hard feelings about her choice to step away from the role as far as I know because they were changing the direction of the character.” 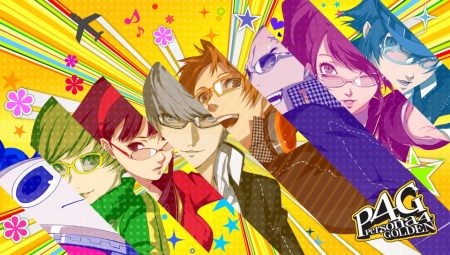 Fitzgerald worked together with Valerie Arem from PCB Productions (who also voiced Naoto Shirogane in Persona Q) on a couple of games: Catherine, and Shin Megami Tensei: Devil Survivor Overclocked. “So Val and I got to know each other as friends during that period working on those games. When Yu was looking for possible replacements for Chie, Val literally just turned to him and said: ‘Ì know Chie. I know her. Let me just cast her. We’ll bring her in. You have to trust me. And if she’s not right we’ll find someone else. But just trust me.’ I didn’t know who Chie was as I never played Persona, and so she just called me in and I showed up.”

Chie Satonaka has a love for kung-fu movies and Fitzgerald says she was already educated on that front, due to her husband being a major fan of them. “He got me into ’70s and ’80s kung fu movies. He’s a huge fan. So much of a fan that he created a website all about kung fu movies- he is that side of Chie. So I had been educated on all things kung fu through him, and so it was really exciting to me when I walked into the room and they were like: We want you to play this teenager who’s obsessed with kung-fu and also food.’

Fitzgerald continues. “Val was like I think this character is you so play yourself but like when you were in high school. So I did. And Val the director knew exactly how to square me into the pocket of what they wanted and Yu was very happy with it. The romance between Chie and I began. I was so blessed- because when you play a character in a video game, you think: Okay I’m going to do this one video game and that’s it. You never think that you are going to come back and do more as it’s not like an animated series where you get to develop a relationship, character traits, and develop as a character.”

“For that game to keep going, and I get to reprise the role of Chie and with each game, they would discover new things about the character? Man, it was an amazing journey. I don’t know if I’ve had an experience that has topped it yet.”

The importance of solidarity between actors in the community

In the acting community people get replaced often, however Fitzgerald stresses on the importance of communication and honesty with each other. Before she accepted the role of Chie she made sure to ask a few questions regarding Tracey.”I made sure of that, because I didn’t know when I showed up that I was replacing someone, so I as an actor asked all of those questions,” she said.

The questions Fitzgerald asked were:

Fitzgerald stated she hasn’t always been shown the same courtesy. “It’s happened to me maybe three times this year, where I was in negotiations to keep my role and they decided to replace me, and the other actors didn’t contact me and say hey: are you in negotiations or have you willingly walked away from this role?”

Fitzgerald explains when negotiations occur. “Usually negotiations occur if its a franchise and someone’s been playing the character for many years, so if an actor comes in and wonders why are you recasting that’s when you talk to the other actor. Obviously, no actor I know willingly gives up a job.”

She values solidarity within the community as well as the relationships formed. “Ì don’t want to have any bad relationships with other actors because we have to see each other for the rest of our career. Producers come and go but us actors are literally in each other’s universe forever. Until I talk to the other actor I don’t agree to things,” Fitzgerald said.

With Fitzgerald’s and Tracey’s case it was a different situation.

“When they’ve changed the character and the actor says no I’m not doing this adjustment, this isn’t in my wheelhouse, that’s a totally different thing than someone who is in negotiations to keep their role. I was blessed I wasn’t scavving- meaning I wasn’t taking someone else’s job. They literally were doing a recast based on wanting to go in a completely different direction legitimately. So Tracey did know. She did know that she was walking away and that they were going to recast appropriately the high school version of the character that they were looking for.”

Keeping grounded with the power of HU

To keep herself grounded when situations get emotional and stressful, Fitzgerald has been singing the word HU for 20 years. “It’s like the `HU’ in human I sing it for 20 minutes every day. When I started singing it 20 years ago it was to be able to stay grounded, balance my emotions, and to connect with that heart place within myself that knows that everything that happens on the outer is just stuff, and what matters most is being centered within myself.”

Fitzgerald says it helps her let go of things quickly, and reaffirm her ability to just trust. “As an actor the amount of rejection, and trauma that can happen in this career I really needed something to balance me so this word HU it is my go-to thing when I’m feeling out of balance,” Fitzgerald said.

It’s okay if Chie’s voice is not your cup of tea!

Fitzgerald just wants to remind people to not force their opinion on others. “It’s perfectly okay and allowed in this universe to have opinions about things. Now whether or not you are trying to force your opinion on other people then that’s not okay. So if you love Chie don’t try to force your Chie love on someone who doesn’t love Chie.” 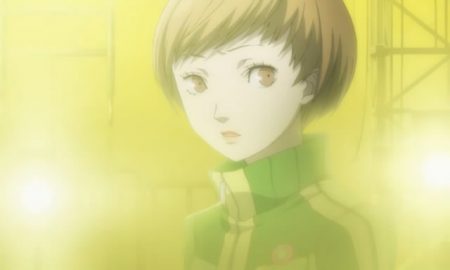 She has no problems with being disliked, as it doesn’t stop her from being who she is. “I think that has to be the case if you are going to choose acting as a career anyway. It doesn’t stop me from being me. You gotta be who you are. You can’t be worried about whether people love you. You can’t make everyone love you. Be who you are. The more truthful you are to yourself- even if someone doesn’t like you, they’ll respect you.”

Exploring the character of Chie further in Persona Q: Shadow of the Labyrinth

In Persona Q: Shadow of the Labyrinth Fitzgerald was able to explore another side of Chie that she hasn’t seen in any of the previous games. “So we get to that part in the game [Where Chie gets scared] and we literally had to stop recording and have a conversation about it.”

Erin: ‘Chie doesn’t get scared. What do you mean she gets scared?’

Producers/director: ‘Oh no. She gets scared of ghostly things.

Erin: She goes into the television, fights all those monsters and NOW she’s getting scared? You gotta be kidding me. I don’t know how I feel about this.

“Because I felt it was way outside the character up until that point, but the producers and director were so great.”

The director and producers decided to incorporate Chie being afraid as part of her character development.

Fitzgerald started to get into it but says it became hard. “Being scared for me as an actor is my least favourite thing to play because I actually have to be scared. So I become really scared. And she [Chie] was so scared and I was terrified of the actual recording. And I hate that feeling. I hate that terrified feeling. But it was the hardest part of recording Persona Q. Coming to terms that Chie is going to be terrified, and then having to be terrified for four hours in the booth.”

What lessons does Chie Provide?

Fitzgerald learned big lessons from voicing Chie, she shares what they are.

“I gained a lot of self-acceptance. That shadow Chie portion in Golden really hit home for me at that time, and it really spoke to me. There were so many lessons in that, it was just so deep. I feel like I went on the same journey that Chie went on, and on the other side, I was able to kind of love myself and accept myself more even for all my flaws and the areas I do like, and the things I do find annoying about myself. So Chie has taught me self-confidence, that standing up for my friends is okay, and I have a little bit of a Chie in my own personal life, and I need to sometimes back down.”

She then shared her own love towards Chie.

“I just feel like she’s so awesome, so cool and she’s brought out the fighter in me. It’s really fascinating. I didn’t expect her to be as popular as she is I thought one of the other girls would have been more popular. The reception that I’ve gotten for Chie specifically has really validated my existence as a human being. Not to say everyone needs approval by a video game character, but there’s something about how relatable Chie is that lets me know that it is about connecting with other human beings and just being honest and being yourself. The more honest you are with you, gives the others permission to be who they are. I think that’s what Chie does. Is give people permission to be who they are. That’s the biggest gift we can give each other as human beings.”

Hey! I'm Nadia! I am a big fan of RPGs and you can almost always catch me playing one in my spare time. Writing is my passion, and my intention is that you all learn something through my work!
Previous Nintendo Download: Snip Your Way Out of the Top Doom Party and Rocket into L.A.
Next The Nintendo Switch needs more ports. Here are some titles begging for an appearance