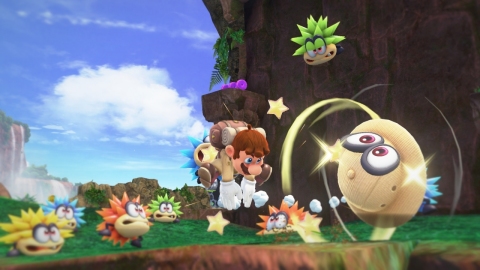 Believe it or not, it’s not the number one selling game last week, but Super Mario Odyssey is off to a scorching start regardless.

Extremely promising news coming out of Nintendo this week, as the company announces some Super-sized sales for Super Mario Odyssey. The latest title in the historic Super Mario franchise, Odyssey has been out for all of one weekend and it’s already a beast.

The game has bested Legend of Zelda: Breath of the Wild’s opening weekend in the UK, but that’s not all. According to MCV, it’s also defeated every single Wii U game… ever. Yep, Odyssey s now Nintendo’s biggest opener in at least two generations. Granted, Nintendo’s latest gen isn’t all that aged yet, but that’s still pretty incredible.

Also on the up side for Nintendo are console sales. While we already know that the Switch is an early hit, it’s proving to be an even bigger one than Nintendo had hoped. Originally, The Big N had forecasted 10 million consoles sold for 2017. Those are heady numbers. But as impressive as that would’ve been, Switch is going even better.

The company has adjusted its prognostication to account for another 4 million units shifted. That’d bring the total to 14 million, and that’s plain old terrific. Whether or not the company can keep these sales going or not all depends on games of course.

With more big games on the way for this holiday though, it seems that the Switch should have a very good Holiday in general. And you could probably bet on more for next year, as some more impressive stuff heading our way in 2018. As of right now anyway, Nintendo is back in a very big way.

Oh, and that “number one” game for last week? It was Assassin’s Creed Origins. How’s that for another big comeback?

Jason's been knee deep in videogames since he was but a lad. Cutting his teeth on the pixely glory that was the Atari 2600, he's been hack'n'slashing and shoot'em'uping ever since. Mainly an FPS and action guy, Jason enjoys the occasional well crafted title from every genre.
@jason_tas
Previous Destiny 2 – Expansion I: Curse of Osiris Reveal
Next XO-Manowar #10 (Comics) Preview