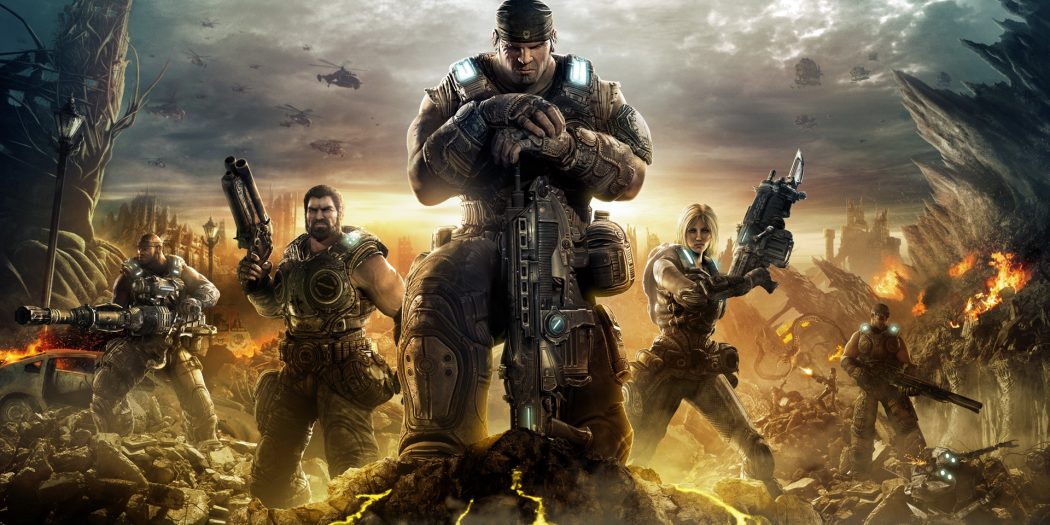 Home / Editorials / Make This Game: Gears of War – The RTS

Make This Game: Gears of War – The RTS

Personally, I have no idea how this game has not been made yet. It’s so perfect. Gears of War already has everything an RTS needs.

Although there’s not as big of an audience for real-time strategy games as shooters of any type, I feel this one would do really rather well.

Admittedly I’m not a huge presence on the RTS scene as a gamer. The furthest I’ve jumped in is spending a lot of my gaming years playing Command and Conquer and I’ve not really ventured further out of that.

Every other RTS I’ve played has been overly complicated (yes, I’m a simpleton) or just plain bad. A Gears-flavored one however, I think could truly be something special.

As a franchise, Gears of War has the factions, troops, special troops, vehicles (land, sea and air) and even super weapons, to make an RTS feast.

Factions and Their Troops

If you want to add Gears of War 4 to the mix then there could be 5 factions total for a Gears strategy title. The human CoG and Outsiders, Locust, Lambent, and the hideous Swarm should really all be in there. Hell, maybe even the Stranded could be a part of things. All of these extra factions could make for a very interesting campaign, and certainly be a boon to varying online matches for multiplayer fans. You could even go before and use the UIR if you wanted to- how’s that for mining the lore?

There are a lot of possibilities right there, even more so if you’ve read the books. But I think for this proposed game, I’m not going to include Gears 4. We haven’t jumped too much into that timeline yet, to be honest. And it could be fodder for a sequel to a Gears RTS foray. For now, we’ll keep it simple and focus on the CoG and the Locust. I’ll spend more time thinking about it when Epic or The Coalition call me up.

From the first Gears of War alone there are plenty of troops anyway. But as the games go on there’s even more that probably could add up to way above the average that’s in your typical RTS.

In the red corner we have the Locust. Coming out of their barracks we have Wretches, Tickers, Serapedes, Drones, Grenadiers, Snipers, Boomers, Butchers, Grinders, Kantus'(regular and armoured), Theron Guards and Maulers. There are still plenty more, but as the Locust use living things as their vehicles we’ll talk about those in a bit. 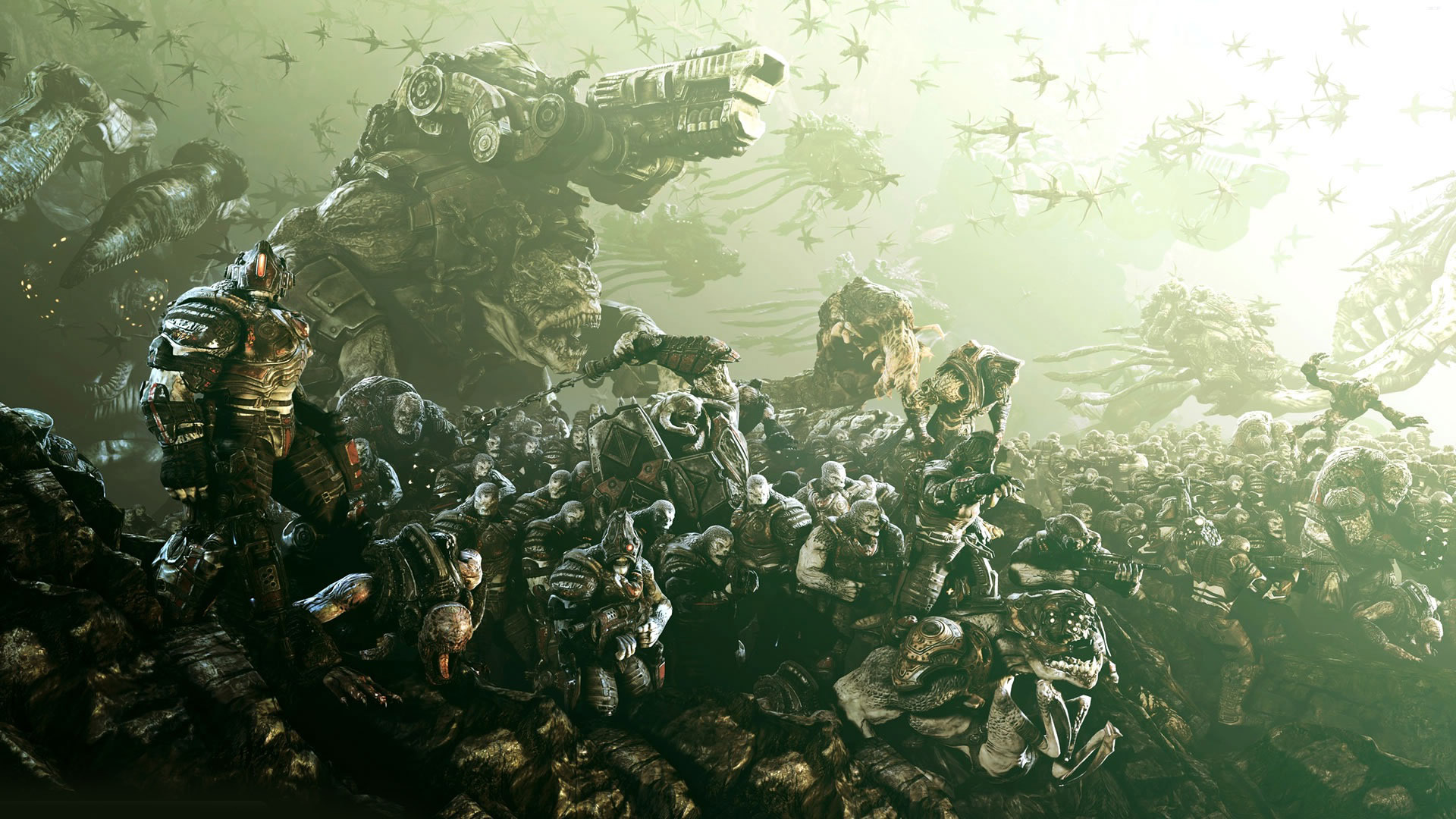 These can be used in interesting ways. You could lead your infantry charge with Wretches and Tickers. Then have them followed by Maulers shielding the drones with a Kantus somewhere in the middle, healing fallen drones. Maybe some Boomers at the back being a nuisance.

In the blue corner we have the Coalition of Ordered Governments. With not quite as many troops but still a sufficient amount. You have your regular Gears, but equipped with different weapons. Maybe bigger sets of armour to make them stand out from other troops too. So rather than troop-types, let’s list them by guns.

Lancer, sawn off, longshot, mortar, mulcher, oneshot, flamethrower and vulcan. Not quite as much as the Locust but still enough to fight back. Admittedly, whoever was to develop this one might have to invent some new ones. Go all Halo Wars about it and create new units that were never in the original games. However this will be necessary for this idea as the Locust have far more variety.

I think to even the score they would need to make up some new things for the CoG. You could simply equip gears with boomshields but that would feel lazy. Each of these troops has their typical RTS troop purpose. Standard, medic, ranged, explosive. It’s all there.

These types of troopers would be important characters throughout the games. Like Raam, Skorge, Myrrah, Hoffman, Tai, Dizzy, or any member of Delta Squad. These units would obviously be more powerful than your standard unit. They could even increase the morale of surrounding units, which in turn would boost their damage.

Maybe each have a special ability too. Raam can all on the kryll, Skorge can cut through centaurs or call his giant reaver, Myrrah can call her big bug. Of course you can only have one of each. Rather than being able to storm the enemy base with 50 Myrrah’s.

Much like troops, Gears of War has just the right amount of vehicles. Although again, the Locust are more equipped so it would require more work on the CoG side.

For the CoG there’s ratbikes and packhorses from the books, centaurs, rat trucks equipped with vulcans (or whatever they were in Gears of War 3 when leaving Anvil Gate), grindlifts, APCs, silverbacks, junkers, ravens and submarines.

There’s a few vehicles from the Locust that could arguably be troops as well. Such as the berserker, corpser, bloodmount and leviathan. But for the sake or their size we’ll put them under vehicles.

Alongside these we have seeders, which can be used to spit out nemacyst either in a long range, artillery like manner, or you could create a mist of them and place them over a certain area to block out parts of the map. Much like how they’re used in the game you would have to plant them in the ground to shoot nemacyst. At which point they would be vulnerable to attack.

Siege beasts could be used as a lighter artillery. There’s also reavers and gunboats. You could detach the little locust dolphins from the side and have them as a singular unit. For transport the Locust have barges. Torture barges for underground and gas barges for above.

The super weapons are quite simple. Of course the CoG get the Hammer of dawn. Hell, maybe Delta Squad could actually be a super weapon too. For the Locust it could be the riftworm which has the ability to destroy large areas. That would be pretty cool to see in action.

And now for my personal favourite part of this game idea. A Gears RTS would be awesome on it’s own but with this incorporated it would be even better. So, as anyone who has played Gears of War knows, the Locust come from underground. This will be no exception, the CoG will be above ground and the Locust below. Because of this the map will have to slightly smaller than your average RTS map, but technically it will be just as big but folded rather than flat out. Obviously the Locust would start underground and the CoG above.

This raises the question of how you would get to one another. Well, this is where it gets interesting. There could be a tunnel here and there on the map but that’s the boring route. Instead we would be able to make our own emergence holes. Or dig in the CoG’s case.

Emergence Holes and You

As the Locust, you would need to do their trademark emerging. There’s several ways you could do this. Either have a small group of Drones and have them pop out 4 or 5 at a time. This could give an unfiar advantage to the Locust, so to make it fair it would be restricted to only a few drones at a time and only smaller Locust can get through. Perhaps these smaller holes can only be dug into soil. There- now it’s not so overwhelming for the puny humans.

Now, to keep things fair the Locust wouldn’t be able to emerge anywhere. As a defence, the CoG will automatically have the ability to create a type of floor that will be impenetrable to all of the corpsers efforts. These would be fairly cheap to build otherwise it would be a huge disadvantage. Which of course is the whole theme of this war, but when it’s PvP you need to even things out.

This ground defence would only be able to be built within a certain distance of the buildings so that the entire map can’t be covered. But just enough so the emergence holes aren’t too close. For further defense, any explosive troop would be able to close holes. However, the larger the hole, the larger the projectile would need to be.

Getting the Gears into the Hollows

Grindlifts. That’s how. While being a good way to transport Gears and run down Locust, the rigs would also be used to take units into the hollows. Working slightly how the seeder does, you would need to anchor the rig before using the grindlifts.

The rig would double up as a sort of APC. You can place several troops on the rig. They would be able to fire over the side as the rig has no defenses. Maybe you could even have an upgrade option for the Locust so they could use grappling hook to hijack the rig.

Once anchored all you’d need to do is make troops interact with the rig and they would use the grindlifts. Similar to the emergence holes, only a handful of troops would be able to go at a time. Now, to dig a bigger hole to get into the hollows a new vehicle would need to be created. Maybe one of those things the Underminer used all those years ago… If you don’t get that reference, you’re too young.

The story is never really the most important part of an RTS. For some reason they’re usually absent. The tricky part for this one is to know where exactly this would take place in the timeline.

It would need to be a background occurrence to whatever delta squad are doing. As that would create too many plot problems. It could be between games, it could even be over the course of all three games, jumping years. Honestly this isn’t the part I spent much time thinking about. 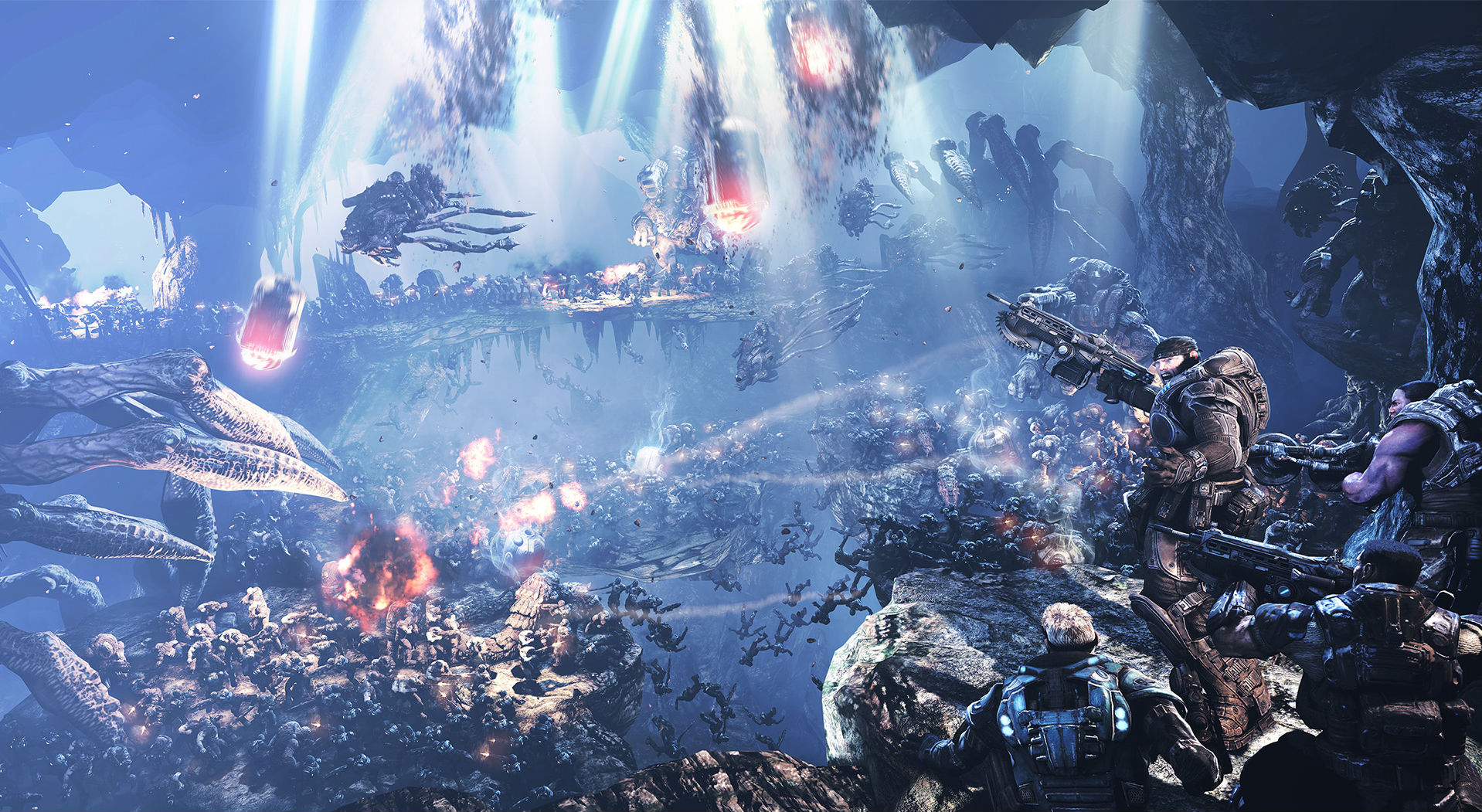 Hopefully, from this awful description, I’ve managed to at least partially get the image out there.

Just imagine a large scale war between the CoG and Locust playing out across your TV. The Locust pouring out of the ground in several locations at once, all while CoG forces push counter-offences on multiple fronts. It’d be awesome.

Honestly, I feel pretty comfortable saying that this game needs to be made.

Massive game and movie enthusiast. In any free time I'm always playing something or watching something. I didn't choose the hermit life.
Previous Bloodshot Salvation #3 (Comics) Preview
Next Marvel sending out “party kits” for Avengers: No Surrender shindigs