Art Of Over The Garden Wall (Book) Review

Go Over the Garden Wall in Dark Horse Comics’ new art book based on the excellent cartoon.

Over The Garden Wall is a delightful and refreshing animated miniseries. It aired on Cartoon Network as a Halloween special in 2014. The show’s unique characters, plot, music direction and antique inspired art led to critical acclaim. Now revisit the Unknown and all its mysteries in a gorgeous art book detailing the process that led to the show’s success!

Art Of Over The Garden Wall is quite a wordy read. There is so much textual content along with visuals it feels like reading an illustrated book at points. Most of it is very interesting from a production and influential point of view but it can be tiring.

The full pages of text are intimidating and will drag the flow down to a crawl. It sacrifices pacing for heaps of background knowledge. Expect to see the perspectives from multiple people such as Nick Cross (art director), Amalia Levari (story), Pendleton Ward (story) and McHale himself. 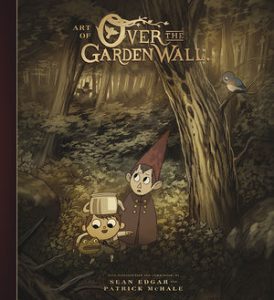 Reading about Over The Garden Wall’s conception was odd.

Here is a show you watched, but a good portion in the book is devoted to something you’ve never heard about or seen before. By that, I mean The Tome Of The Unknown.

A lot of the show was quite different to what it finally became. Here though, you can read about how execs and colleagues shaped and directed the final story overall.

Initial designs of the major characters in the show are present here for the first time as well: Wirt, Gregory, R. Bliss, Beatrice, The Woodsman and The Beast.

After talking about its initial conception, the book organizes art by the episode. Each episode is varied and different, requiring more or less design work. The overarching plot is shown intertwining with the episodes and how initial storyboards needed to be redone due to a crucial design change of The Beast.

The end of the book is devoted to smaller aspects of the show such as the music design (including vinyl covers), comics and the crew’s own inspirational objects.

The book has wonderful double page spreads everywhere with notes (from all sorts of different people as mentioned above) on just about everything. The backgrounds of the show seem to be the focus of the book. A majority of production concerns and passion went about creating the atmosphere of Over the Garden Wall and maintaining an antiquated style.

The backgrounds needed to balance realism and simplicity for them to actually be able to be viable in the show: both from a production and a thematic point of view.

Character design sheets, poses, outfits, lighting considerations, expressions, recommendations and storyboards are all featured in the Art Of Over The Garden Wall. Dozens of discarded ideas and prototypes are present throughout the book.

As you read, it will become more and more apparent that the show had a lot of potential thrown in. Many ideas had to be scrapped or changed. Experts and artists new to the industry were recruited to help on the show.

I liked this aspect of the art quite a bit – old expertise mixed with fresh ideas and gaining the best of both to be as creative as possible.

Art Of Over The Garden Wall

Art Of Over The Garden Wall is a lengthy read. It will take you longer to read the book than watch the whole show, but all the gorgeous backdrops and the cute commentary make it worth it.

Megan here! I am pretty well versed in all things weaboo and geek. I've loved videogames since I was born and even made my own for my 3rd year of Multimedia at the University of Pretoria in sunny South Africa. I have enjoyed anime from the days when Pokemon was considered satanic and Aniplex used to exist on DSTV. In the past couple years I have really gotten into manga, particularly Berserk to see where the story headed after the original anime. If there's one thing I will always love 110% it is cats. Don't doubt my faith in my love for felines.
Previous Marvel Legacy’s ACTUAL big return revealed
Next Episode 13: The Unnecessary Trailers