DK books continues its Star Wars series with another extensive volume. Star Wars: The Visual Encyclopedia is as loaded as it gets.

A long time ago…

George Lucas’ baby, Star Wars has seen some streamlining since its purchase by Disney. Quite a bit has been excised with the loss of the Expanded Universe, which included a number of comics and video games. Even so though, it’s still massive in scope. With multiple eras and thousands of characters, Star Wars combines three discernible time periods. Sorting through it all is no easy task.

That’s exactly what DK Books and authors Tricia Barr, Adam Bray, and Cole Horton have done here though. All three authors are Star Wars vets, having contributed to a number of books, and you can tell. Their latest is a team effort that covers the Star Wars series from the beginning up to the end of The Force Awakens. And you bet it’s pretty darn complete. 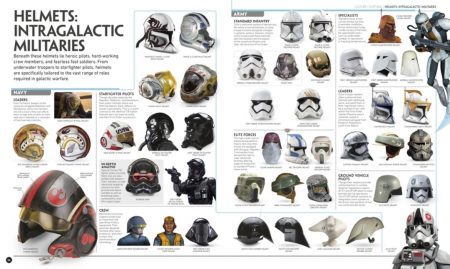 In total, the tome encompasses five major categories, all of which are further broken down into sub-chapters. For example, we’ve got a “Nature” section that’s made up of two-page chapters like “Space Creatures” and “Wet Habitat Sentients”.

As you might imagine, this all gets pretty specific.

A universe of detail

We start out in the Geography section, with a map of the Star Wars galaxy. Ever wonder where Kessel (of Kessel Run fame) is? Have a look at this map and you’ll see it’s in the outer arms of the spiral.

From there we go into individual worlds. The book goes fairly in-depth about the unknown regions of the galaxy, and even pours over the geography of Star Wars’ most famous cities.

Each chapter provides this same amount of study into the Star Wars universe. If you’re a fan, it’s a sight to behold, as flipping through the pages is incredibly fun. I love these kinds of books to begin with, but I have a hard time believing any Star Wars fan wouldn’t have a big smile plastered on their face reading this one. 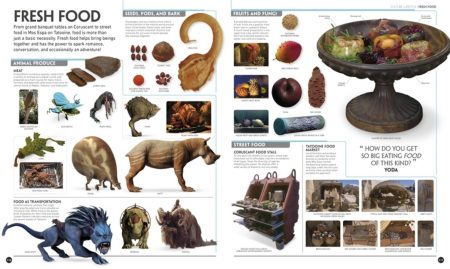 Also very nice is that the book doesn’t come across as dry in the least. We’re not talking walls of text here, as the story of Star Wars is instead told via stuffing as much imagery onto these pages as was humanly possible. Still, and don’t get me wrong, there are all sorts of interesting little nuggets written next to those images.

Putting the “visual” in Visual Encyclopedia

DK is about as good as it gets with these kinds of books, and it’s obvious that they know what they’re doing in this Visual Encyclopedia.

The volume is wall to wall pictures of every sort, from throughout the history of Star Wars. Lavishly spread about, these images are right from the source material, and add in tons of life to the book’s pages.

For example, devoted to the Jedi, one part of the “History” section contains every Jedi Knight and Non-Council Member from Qui-Gon Jinn to Ma’Kis’Shaalas (who?!). Heck, you’ll even run across “Fallen Jedi” like Dooku and Pong Krell. And all are complete with short description and headshot. 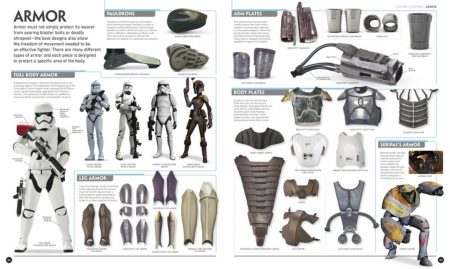 One kind of weird thing is that some of those character bios are animated. So while you’ll see a live action shot of a Clone Trooper, standing right next to him is an animated Stormtrooper. In that specific case, it’s kind of nonsensical, but there is a clear reason why it’s done.

In the short amount of time that Star Wars has had a “new” expanded universe (the TV shows), it’s accumulated quite a bit of fresh canon. It pretty much has to be included in the book like this. Yeah, it might look a little “off”, but there’s no other way to do it.

Also worth a mention is that the Marvel Comics aren’t covered here. I’m not sure why, other than maybe they’re not considered canon. That’d be strange, since they’re essentially from a Disney company, but you never know.

Those are probably the only “down sides” of this book though, as it’s a great amount of fun from cover to cover.

Terrific imagery throughout, with some minor quibbles - 89%

Star Wars: The Visual Encyclopedia is a flat-out great read that covers all three major eras of the Star Wars universe. There's more info in it than you're likely to find in a series of books, and the imagery used is striking and well-implemented throughout. I didn't love the animated pictures placed right next to the live action stuff, and there's no Marvel Comics presence, but neither is a deal breaker for me.

Jason's been knee deep in videogames since he was but a lad. Cutting his teeth on the pixely glory that was the Atari 2600, he's been hack'n'slashing and shoot'em'uping ever since. Mainly an FPS and action guy, Jason enjoys the occasional well crafted title from every genre.
@jason_tas
Previous Is the Nintendo Switch getting achievements? Could be, according to one indie dev
Next This Wednesday’s Nintendo Direct to focus on Switch and 3DS games