Home / News / SDCC 2017: Qualify for a Position as a Colonist with Alien: Covenant

SDCC 2017: Qualify for a Position as a Colonist with Alien: Covenant

Alien: Covenant will have a pretty large presence at Sand Diego Comic Con.

The Ridley Scott directed film released theatrically earlier this year, and will be coming to DVD, Blu Ray and other home media versions on August 15. 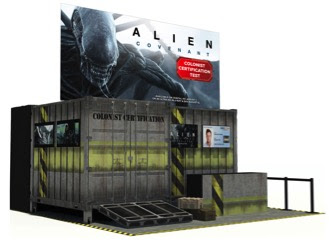 The actual presence at the show will be more than a standard booth, though.

Courtesy of Twentieth Century Fox Home Entertainment, fans will be able to test their merit in an attempt to qualify as a colonist for the next Weyland-Yutani colonization mission.

After completing the test, fans will receive a special badge and a set of collectable pins. Fans will also be able to pre-order the film and receive a special edition lithograph while supplies last, according to a press release.

The movie will have a presence off of the show floor as well.

” On Thursday through Sunday, convention goers can seek and take photos with the “Secure Egg Transport” featuring fragile and dangerous Alien eggs guarded by employees of Weyland-Yutani.  Those that tweet using the hashtag #AlienSweepstakes during Comic-Con will be entered to win an authentic Alien: Covenant replica facehugger,” the press release reads.

Erich was introduced to gaming by his grandfather before he could walk. Since then, he has grown up loving Nintendo and most games in general. He couples his love of videogames with journalism to cover news, provide reviews and tell it how it is in the gaming world.
Previous SDCC 2017: Mezco reveals One:12 Thor: Ragnarok, Spider-Man, Catwoman and more
Next PS4 system software update beta is open for registration