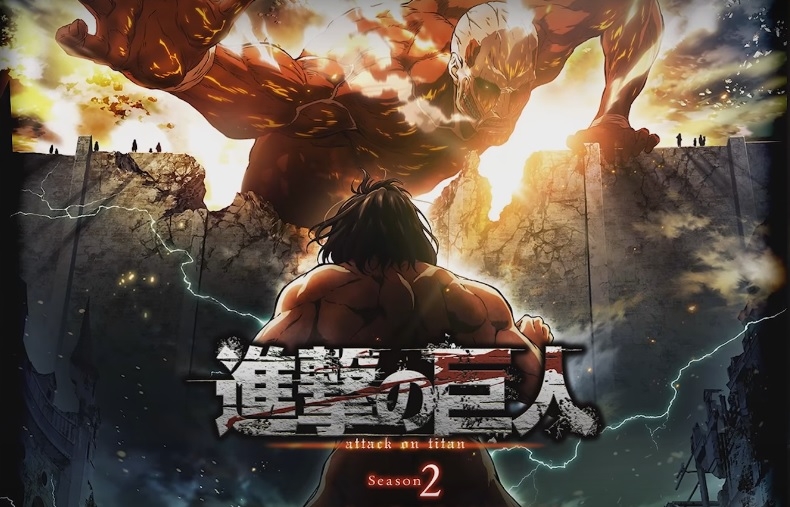 Between its great themes, music and shifts in tone, “Attack on Titan” season two was well worth the wait. 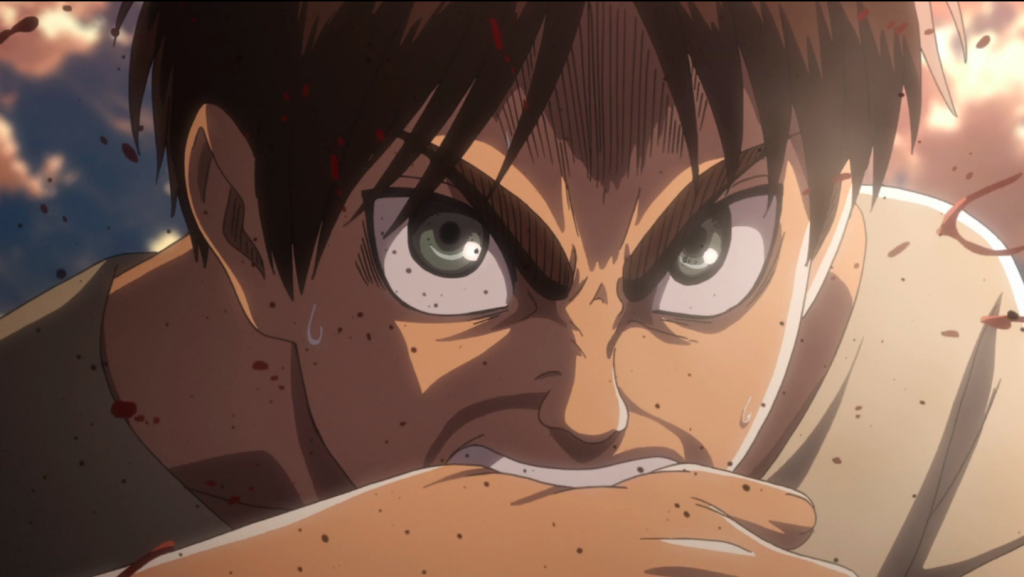 After the events of the first season, the members of the 104th Trainees are put under surveillance while Eren and Mikasa recover in the innermost city. Armin and the corps’ commanders, meanwhile, investigate the origins of the walls, which they’ve discovered house several ancient titans. The only ones who know why are the church, and so Erwin, Levi and Hange must find a way to force the answers they need out of them.

Things quickly take a turn, however, when Titans are spotted inside Wall Rose, and worse yet, they’re headed toward the unarmed 104th. The squad commanders rush to get Eren to them in time and discover how the titans breached the walls in the first place, while the 104th must do what they can to survive until help arrives.

It’s a departure from the tone of the first season that does the series well, replacing action and intense aerial combat scenes with quiet, tense moments of horror and survival. Without their gear, the 104th have no way of fighting against the titans and each of their encounter’s chances of failure become exponentially more dangerous.

Not only that, but much of the season focuses on the 104th instead of the main characters. Sasha, Reiner, Bertholdt, Ymir and Krista are all fleshed out further and given the spotlight, revealing their motivations and establishing more meaningful roles in the story. It makes for a much more engrossing season and a welcome break from the usual cast, while also helping to establish the rest of the characters as more than potential cannon fodder for the Titans. 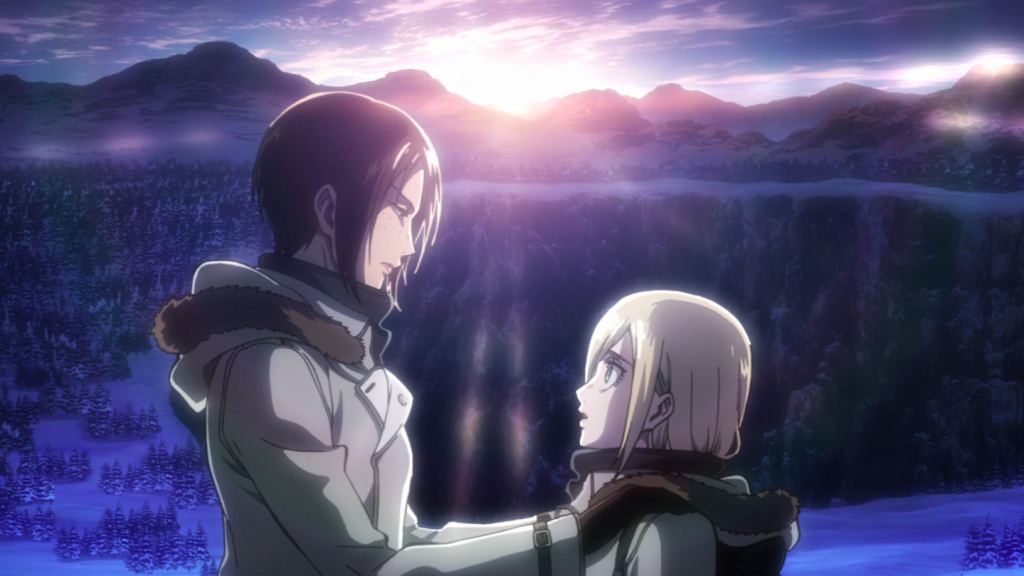 The updated animation does a great job of matching the look of the series’ first season. Character designs no longer have thick outlines, but are still lively and emotive, expressing anger and terror with different shadings and eye designs. Characters will boast bright colors and large, burning eyes in moments of triumph or courage. When things shift back to horror and survival, they become darker and more muted, with shaded tones and hollow stares.

Movements are crisp and clean, with titans blasting forward toward soldiers who twist and dart through the air with 3D maneuvering gear. Action scenes later on in the season are also top notch, living up to the battles of the first season and even surpassing them on several occasions. There are some notable dips in quality in later episodes, but none that detract from the overall experience for too long. 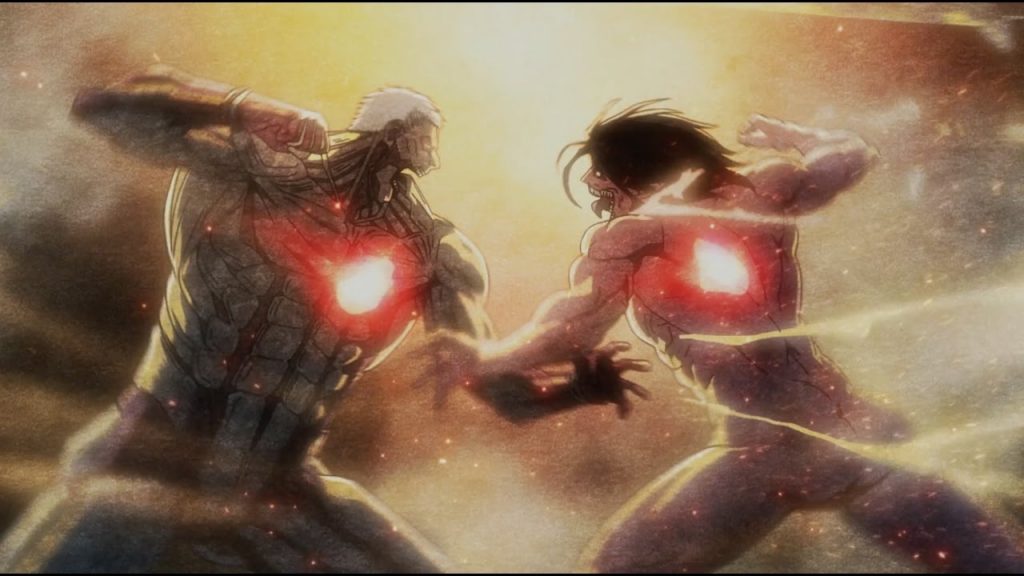 The series’ soundtrack fits perfectly, building off the music of the first season and slightly tweaking it for the new themes presented. Songs build up to perfectly timed climaxes that boost the mood of major scenes, whether it’s unnerving strings alongside a discovery regarding the Titans or booming vocals to match the anger of a betrayal.

It also wouldn’t be “Attack on Titan” without a rousing opening by Linked Horizon, and they delivered once again with “Dedicate Your Heart.” Bombastic and lively, it sets up each episode just as well as either of the first season’s openings, and even up to the last episode it’s worth letting the opening play just to hear the song again.

Voice work is still excellent, with emotive and believable performances. The voice actors for the 104th characters deliver standout work, further enhancing the story and making each development that much more impactful.

Three and a half years is a long time to wait for a second season, but “Attack on Titan” proves that it can pay off. Fans of the first season won’t be disappointed by this exemplary followup and will be left eagerly awaiting the third season.

After almost four years, "Attack on Titan" returned with a second season that builds on the strengths of the first.

Keenan McCall is a journalist and writer with a passion for animation. From video games to anime, anything that sets art in motion will get him talking and writing nonstop.
Previous Age of Empires Strikes Back: Original Game Remastered
Next IDW set to close out season one of Hasbro-verse comics with First Strike