The Lion King for the Sega Genesis released in 1994. In its wake, it left behind a seemingly entire generation of kids who from that very moment, would hate giraffes and ostriches. There is more to this platformer than hating African wildlife, however, and if you have the patience to get through the learning curve, you will be in for a great experience.

Taking off the nostalgia goggles:

So, here is the thing. I played The Lion King as a young child and continued to play it through my seemingly entire life. There was time in the middle there where I didn’t play, but just recently I returned to and finished this game for the first time.

There is a lot to say about The Lion King. The soundtrack is ripped right from the movie and aesthetically, the game is close. These don’t help me to easily take off the glasses.

The point I am trying to make here is that I have returned to The Lion King recently, and what I found is a platformer that not only is passable, but stood the test of time.

Alright, lets get down to the first, and probably easiest to throw away category for review purposes. The Lion King looks alright. Simba looks a little washed out and bland on the Genesis, but on the Super Nintendo, he looks a lot better. 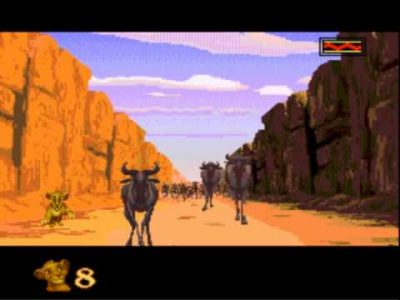 On both versions, the environments are rich and colorful. The colors pop and each level is distinct and beautiful.

In addition to each level being set in an obviously different part of the film, the colors and aesthetic tones of the levels come together to make each level unique, memorable and an overall joy to play in. There is one specific level, Simba’s Exile, which pales ion comparison to the rest of the game. It is really just a pallet swap and flipping around of the first level of the game.

I just can’t wait to listen to this soundtrack:

It isn’t a secret by this point that I grew up with The Lion King. Both versions, film and game, played a huge role in my childhood. It shouldn’t surprise anyone that I love the music. I don’t have any problem with the music in this game as a whole.

I will say though, that the Super Nintendo version has superior music. The music sounds better and has more distinct pieces. The music in the Genesis game is still passable though, and I still enjoyed it.

The Lion King has some of the best and worst platforming I have ever experienced.

Okay, that may be a bit of a hyperbole.

Let’s say this. When the platforming in the Lion King works, it works well. And when it doesn’t, I’m not sure why it didn’t and don’t know what I could have done better. 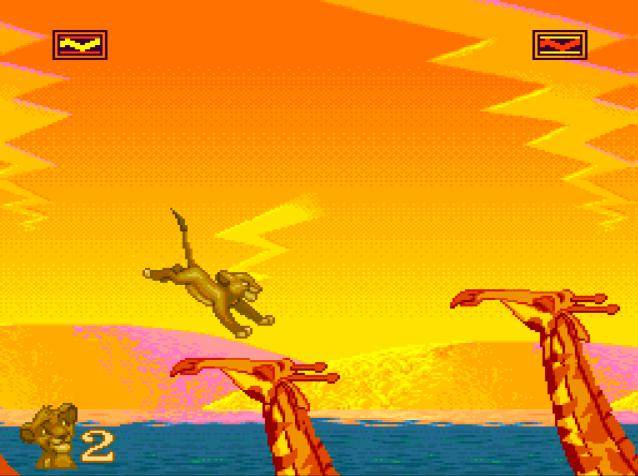 The parts of the game that people complain about: giraffes, graveyards and all work better than they get made out to be. I found that these parts were easier than made out to be. The harder parts really come from places where the platforming should be simple. Jumping up rocks sometimes doesn’t register and you fall down. Other than a few spots here and there, though, the platforming overall gets a bad wrap in The Lion King.

There are levels in The Lion King that differ greatly from the rest of the game. The first of these is the Stampede level, where as  young Simba, you’re running away and through a stampede.

You need to dodge the stampeding herd and jump over rocks. This is one of the tensest levels in the game, and I really enjoyed playing it. Graphically, this level also stands the test of time and looks decent even in 2017.

About three quarters of the way through the game, Simba grows up. The gameplay changes dramatically here. As adult Simba, you’re less nimble. You’re also much more powerful, though. The hyenas who gave you problems fall by the wayside.

As a while, I find that the adult Simba gameplay is more satisfying than cub Simba. This is just preference, though, as both control very well. there are no glaring problems with either iteration of the character.

The Lion King has an important spot in my heart. Just beating it for the first time last week was a very visceral experience for me, as I spent my entire childhood trying to conquer this game. The game is definitely a product of it's time. It is brutally difficult to the newcomer, but for anyone who has spent some time with it, the truth comes through. A tough platformer with a heart of nostalgia-tinted gold, The Lion King is wild in the best possible ways.

Erich was introduced to gaming by his grandfather before he could walk. Since then, he has grown up loving Nintendo and most games in general. He couples his love of videogames with journalism to cover news, provide reviews and tell it how it is in the gaming world.
Previous This week’s Nintendo Download builds a LEGO City
Next Jak and Daxter series coming to PS4 in 2017