Udon has another addition to their lineup of Capcom-themed comics. Ready to see the World Warriors battle the Darkstalkers?

Writer Ken Siu-chong and artist Edwin Huang are set to bring fans a dream matchup that’s somehow eluded the video game realm thus far. I mean really, how is it we’ve seen Street Fighter “vs” Tekken and Marvel, and not seen a Darkstalkers crossover? Yes, I know some of them were in the Marvel versus games, but I’m not counting that. I mean, why haven’t we seen a full-on crossover game? Fortunately for fans desiring just that, Udon has you covered. 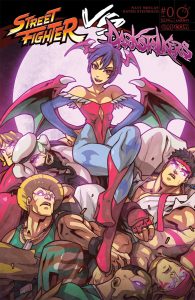 The new series will run eight issues, and feature the talents of not just the team mentioned above. A special ‘zero’ issue will star Matt Moylan and Hanzo Steinbach, who’ll be crafting the prolog. And while issue #1 will focus on the main tale, you can also look for special four page backup stories starting in ish two. So there’ll be quite a bit of SF v DS  to look forward to.

It sounds like you can expect to see all the big characters too. Udon says to look for Ken, Chun-Li, Rashid, Sagat, and Akuma on the Street Fighter side. And the Darkstalkers? Morrigan, Felicia, Jon Talbain, Bishamon, and Donovan will all join the fray.

I notice that Ryu isn’t in there, even though he’s on the cover image. M. Bison is actually absent from both. Seems odd. Still, they may be yet to be announced, or their story here might still be under wraps.

We shall see when the first issue of Street Fighter vs Darkstalkers hits the stands this coming February.

Jason's been knee deep in videogames since he was but a lad. Cutting his teeth on the pixely glory that was the Atari 2600, he's been hack'n'slashing and shoot'em'uping ever since. Mainly an FPS and action guy, Jason enjoys the occasional well crafted title from every genre.
@jason_tas
Previous Here’s 8 minutes of Prey in action. Enjoy
Next Guardians of the Galaxy game coming from Telltale