Barry and the team learn to consider reflections when some new abilities begin to appear in The Flash The New Rogues. 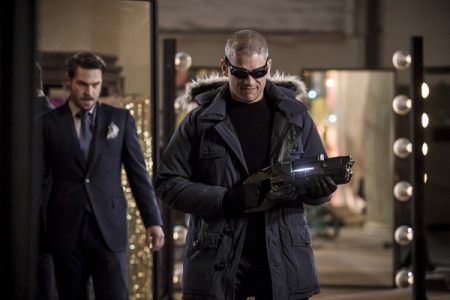 Sam Scudder and Rosalind Dillon are smugly celebrating after a heist. They were raising suspicion because Leonard Snart (Captain Cold) re-emerges, chiding them for their indiscretion. Scudder and Snart disagree over how to enjoy their new influx of wealth. A scuffle ensues, only to be broken up by the latest of the dark matter explosions. Rosalind is thrown spinning, Sam disappears, while Snart and his goons run for cover.

Well, while dark matter doesn’t affect everyone, there wouldn’t be a story if we didn’t have a reaction here. Scudder didn’t disappear, exactly. We learn that the dark matter allowed him to ‘slip’ into the mirror itself. What they didn’t plan on however, was the fact that it took three years imprisoned in the mirror for Scudder to become the Mirror Master.

Meanwhile, Jesse Quick and Wally West are having a great time together. However when Jesse leans in to kiss Wally, he pumps the brakes. She is about to leave, to go back to her Earth. They continue on as friends, for the time being. On the other side of town, Joe West and Barry Allen are attempting to come to terms with their new arrangement. Barry and Ivy are a thing. This means a bit of awkwardness and acceptance for Barry, Ivy and Joe, each.

Across town, Harrison Wells, Caitlin Snow and Cisco Ramone are working on quite a puzzle. Wells needs to return to his own Earth, but this Earth needs a Wells to help the team. So Wells creates an elaborate problem, and has Cisco send the message across multiple Earths. Someone out there must be good enough. Or is there?

When it comes down to it, speed is not how Barry solves today’s problem. Wells purposely made his message specifically complicated to seek out only the best. Caitlin and Cisco, independently, were able to use their abilities to help Team Flash, though Caitlin still needs some practice. When will she come forward with it and tell the team? Or will she divert, and take on a darker path?

This felt like a better episode than some of the earlier offerings. Sure there was drama, but the action was a bit more varied than just the speedsters. CW is making an effort to give you more than just The Flash, but to fill out Team Flash, and you can tell they are starting to get the hang of things again. It will be interesting to see where they go with the Wells characters, and if Wally develops anything. I’m glad to see we’re back to expanding the catalog of who can stand in The Flash’s way. I was beginning to worry that this was becoming a show with nothing but race runners.

A fan of media on multiple platforms, I am always watching or playing something! Who knows what I will be on to next?
@mackeyp42
Previous Street Fighter V has shipped less than 100k copies since May
Next Resident Evil 7 A Closer Look