Valiant’s foray into ancient Rome picks up pace in issue two of Britannia, and continues to be a horror-tinged must read.

Foul hellspawn in the far reaches of the Empire

Britannia is very different for a Valiant book. For starters, there are really no superheroes in it, and there’s way more gore than you might be used to. Oh, and then there’s also the fact that it takes place in the homeland of the ancient Britons, during the height of the Roman occupation. See? It’s pretty unique, and and I don’t mean that just among Valiant’s stable. Can you name a comic from any publisher that takes us back to Roman times? Doubt it. 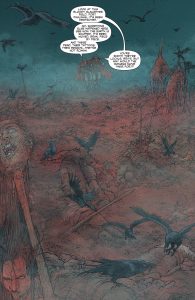 In this second issue, we meet up once again with Roman emissary Antonius Axia and a slave sent along with him, a native Briton named Bran. Last issue, they were sent to Britannia by Emperor Nero and the Vestal Virgins, and it hasn’t gotten any easier since.

Now in the heart of the wild country, Antonius and Bran are finding that the threat they face isn’t exactly human. Things though, are hardly clear cut here, and there are some apparent head-games being played on Antonius especially.

One of the hooks for the comic is that Antonius is the ‘first detective’. A Roman-era Sherlock, he uses advanced observational methodology, that we today would recognize as coming out of any detective how-to. If there was such a thing as a detective how-to (is there?).

Writer Peter Milligan has the Centurion’s skills on display in this issue too, as he tries to figure out just what it is that’s happening. Without giving anything too dire away, I can tell you that whatever it is, it’s probably pretty horrible.

While surveying a gore-drenched landscape, he and Bran are met by fellow Romans. But there’s something very wrong with these soldiers, and their commander as well. They’re more than a little ‘off’, which leads into events later in the book.

The whole thing has the air of Lovecraft about it, and it works marvelously. Yes, there’s fighting, blood and guts, and -most importantly- the supernatural here. There’s something else too though. Something that I’m sure ties into the evil pervading the lands. And that’s madness. 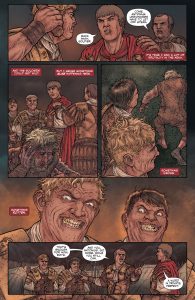 There’s an over tone that’s unmistakable as we follow along with Antonius and Bran. A wicked vibe permeates the story, even affecting the hero of the tale (a bit). And it’s an element that leads me into one of the most striking parts of Britannia #2, the visuals.

Juan Jose Ryp’s artwork is phenomenal. I can’t think of another way to say it, it’s just phenomenal. I wasn’t blown away in issue one for some reason, but man, I am now.

All around, the artist’s style is unique, and loaded with detail. It completely fits this particular story. It’s very much grounded in reality too, although much like the script that it illustrates, it has that mad tint to it. That’s probably why it’s so incredibly effective.

Among the horrific elements that the story boasts by the way (most of which I’ll not be giving away), are the faces of the Roman soldiers. It might sound strange I know, but the expressions that Ryp gives these men is downright chilling.

And it’s one of the main reasons that there’s that Lovecraftian overtone present. Madness is pervasive in Britannia. These are hardened soldiers too, so you know that if there was something that drove them over the edge, well it must be a bad deal.

That’s the opposite of what Britannia is shaping up to be though.

By the end of the last page of Britannia #2, I was more than ready to read the next issue. Between the multitude of horror themes present, and the unnerving mystery that hangs over the whole comic, there's a story that makes you want to read on and on. It's a fantastic book that I'd easily recommend for any horror fan. And even if you're not into horror specifically, it's still a compelling tale that I feel pretty comfortable saying will completely capture your interest.

Jason's been knee deep in videogames since he was but a lad. Cutting his teeth on the pixely glory that was the Atari 2600, he's been hack'n'slashing and shoot'em'uping ever since. Mainly an FPS and action guy, Jason enjoys the occasional well crafted title from every genre.
@jason_tas
Previous GameStop restocks on PSVR
Next Kingdom Hearts ReMIX Collections For PS4