We’ve seen Quinlan as he grew up, experience Quinlan as a gladiator in The Strain: Mister Quinlan #2. 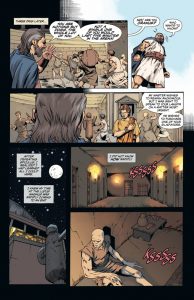 If you missed our review of #1, you can find that here.

Quinlan spent three years mastering the arena. Candidus as he was called then, was at the top of his game. Besting man and beast, he could not be stopped. Or could he?

Had Mister Quinlan finally found a refuge. Or was he merely biding his time. He was being hunted, so what was he doing to hunt the hunter?

Quinlan has become quite the beast. He doesn’t look like much, though through a few highlights we see just what he is capable of, and who he is willing to cross. Remaining loyal to only a select number of comrades.

The story arc is quite unexpected, and that presents half the fun. We have all seen scores of battles where the victor lives or dies by the sword. Though Mister Quinlan is no ordinary victor. All of Rome have seen his masterful skills. And if he wins, then where does he go? How? There are always plenty of questions here. More reason to seek out the next issue. 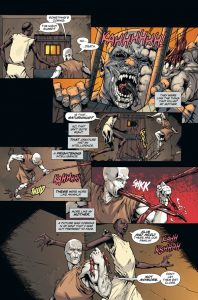 One thing is certain: Mister Quinlan has learned how to handle himself. Whether against one opponent or many. These abilities will be useful if he ever finds the one he is hunting. The Master.

Where would we be without…

Salazar, Champagne and Jackson present a beautiful, yet at the same time horrifying illustration of just what the vampiric infestation can present itself as. Only two titles deep, and already we’ve seen half-a-dozen variations that have yet to surface before.

If you are intrigued by our pale hero, you can pick up a copy of The Strain: Mister Quinlan #2 — Vampire Hunter at your local bookstore, comic shop, or even online for $3.99 US on October 12.

Mister Quinlan's adventures in Ancient Rome continue, and he draws closer to something. Whether or not this is a good thing, we will have to wait until next month.

A fan of media on multiple platforms, I am always watching or playing something! Who knows what I will be on to next?
@mackeyp42
Previous New Pirates of the Caribbean trailer haunts the net
Next Call of Duty 4 Remaster will Require Infinite Warfare Disk