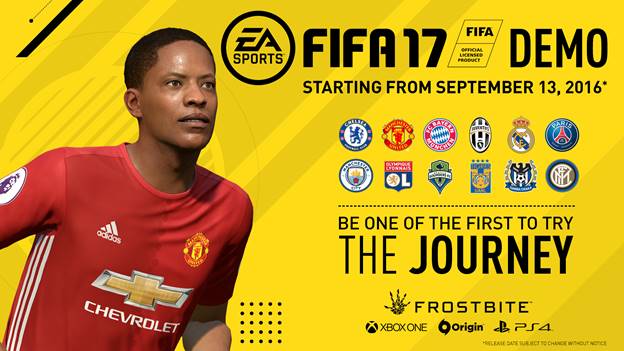 Pre-season is here for FIFA 17

Fresh from EA Vancouver comes a pair of trailers for FIFA 17, and a demo to tide you over till release.

Who doesn’t like a good demo? Especially when it’s for a game that sells as well as FIFA, the answer to that ‘nobody’. The new demo from EA for the 2017 edition of the popular soccer title allows gamers to get a solid feel for what the final game will offer too. Multiple modes and teams have made the cut, which should hold over soccer fans till the game officially launches on the Xbox and PlayStation families of home consoles, and the PC.

One note though, while FIFA 17 will be be available for the Xbox One and 360, and PS4 and PS3, the demo won’t. Current generation gamers and those playing on the PC will be the only ones able to download and play.

As far as the demo though, those who can play it should have some fun. Fans will be able to “live their story on and off the pitch as Alex Hunter”, a star working his way up the ranks in the Premier League, in The Journey. Aside from that, you’ll also be able to play a kick-off match with an impressive array of squads. Manchester United, Manchester City, Chelsea FC, Real Madrid C.F., Juventus, Inter, Paris Saint-Germain, Olympique Lyonnais, Seattle Sounders, FC Bayern Munchen, Club Tigres UNAL, and Gamba Osaka are all open for play. If you’d like to watch a live football match, check out the Football Ticket Pad for affordable Chelsea vs Arsenal tickets.

Stadium choices are included as well, and of course, you’ll be able to take advantage of all the new gameplay features. The demo includes tastes of “Set Piece Rewrite, Physical Play Overhaul, New Attacking Techniques”.

Here’s a video of The Journey mode in action:

Jason's been knee deep in videogames since he was but a lad. Cutting his teeth on the pixely glory that was the Atari 2600, he's been hack'n'slashing and shoot'em'uping ever since. Mainly an FPS and action guy, Jason enjoys the occasional well crafted title from every genre.
@jason_tas
Previous Darth Vader #25 (Comics) Preview
Next Call of Duty: Infinite Warfare story trailer debuts