One Pokémon game to rule them all? Feels that way.

Pokémon GO. Here is a game that has successfully taken over cell phones across the country and has taken social media by storm. The game has only been live in the US since July 6th and there have been endless memes, posts of people not understanding the big deal about this game and other gamers posting pictures of their catches throughout their travels. I have been playing the game since launch and I must say that the game can become extremely addictive. I found myself walking down the streets with my eyes focused on my phone screen just hoping that I ran into some odd Pokémon I hadn’t found yet. Modules are being dropped at Poké Stops near my job so I can have these furry creatures come to me since I can’t leave my office on a whim to catch a nearby Fearow. Not only have I, but the world, have gone Poké-CRAZY with this game. Enough about my own addictive habits though… let’s delve into the game itself and get this show on the road.

Pokémon GO‘s developer, Niantic, is no stranger to augmented reality games. They had first released Ingress back in 2013 which operated in the same fashion. The GPS on your phone builds a map in the game and as you move through the world, you can collect items and even take over strongholds. Pokémon GO is very similar with a few new additions. You create an avatar (which is fairly limited in customization) and as you walk through the world, so does your avatar in their GPS mock up. You choose from the original three pokémon from the Pokémon Blue and Red games. There is even a way to trick the game into giving you Pikachu as an option for a starter. As you walk through the world, your device will rumble meaning that a wild pokémon has appeared! From here, you use pokéballs to try and catch said creature and at it to your collected pokémon and it adds a new entry to your Pokedex.

No need to battle them like the original Gameboy entries. Now, catching this little critters is dependent on your throw and type of pokéball you use (new pokéballs become available as you level up.) While you may not see the need for 30 Pidgeys or 16 Weedles, catching many of the same kind of pokémon gives you candy that you use to evolve them into their stronger forms. I have managed to evolve one of my Pidgey’s into a very strong Pidgeotto and then into a very powerful Pidgeot. It takes time, but while using some of the items you get as you level up, you’ll be evolving pokémon in no time. Some real life locations are dubbed “Pokéstops” and you spin their icons on your device to get items like Revives (self explanatory), Incense (used to attract wild pokémon) and more pokéballs, among other things. There are also locations that are setup as gyms that may be under occupation by a rival team or one of your own where fighting the pokémon there is considered “training”. Overall, I am having loads of fun playing the game thus far and catching pokémon so I can level up my characters is awesome and damn satisfying. Also, as you progress and hit higher levels, the more rarer pokémon begin to show up. Location also plays a major factor in the types that you find. I happen to live by a park and I am constantly swamped by Venonat’s, Pidgey’s and Weedle’s. If you’re near water, you can get water types and big city areas show Rattata’s, Zubats and Fearow’s. It makes you want to always have your Pokémon GO open whenever you get to a new town! The replay value here is astounding and going to new places in the real world opens possibilities for new Pokémon encounters.

Not everything is Sunshine and Rainbows… 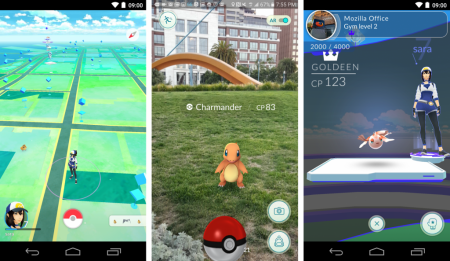 Though all the above is all well and good and I am an avid fan of the game… no game goes without its criticisms here at Brutal Gamer. Pokémon GO is getting more revenue and is getting more downloads than any other iPhone app in the United States. With this great news… comes some terrible side effects. The game frequently freezes… like a lot. I find myself closing the app down and reloading it CONSTANTLY which is a major drag especially when you just caught a pokémon you really wanted. Sometimes you’ll see it in your gallery… other times… gone. Servers frequently go down as well causing frustration among it’s players. The server being down can last for hours and can really put a damper on your experience. I, personally, have experienced this several times and the waiting game proves annoying as you will never know when they will be back up as there is no notification of such. There are also errors that occur when you try to engage pokémon in the wild and they then disappear possibly costing you catching a potentially very rare pokémon. I lost a few potential gems this way (I’ll miss you Pinsir). Another issue that I found to be HUGE is… no PUSH NOTIFICATIONS! You only know when pokémon are nearby if you maintain the app open otherwise you’ll be left in the dark. If I could just open the app, but put it to sleep, I’d like a vibration of some sort. SOMETHING! But no… these do not exist because if they did, you wouldn’t have to get the Pokémon GO Wearable that you wear like a watch and it rumbles when pokémon are nearby. I understand the need to create things people will need, but the lack of push notifications is crucial here. I have a Samsung Gear 2. If they could just create an app for my watch and those players with iWatches, I am sure most of us would spend $2 on an app for this ability. Sadly, something of this nature is not on the horizon, but we’ll see. Another issue I had was that the game doesn’t tell you much on what to do. A lot of what happens, you have to kind of figure out on your own. Maybe this was done on purpose? I’m not sure but curving my pokéball tosses and how to fight in a gym battle is information I could have used. Also… beware! Due to you needing to maintain the app open for most of what transpires in-game, it drains your battery and uses a fair bit of data, so consider yourself warned. 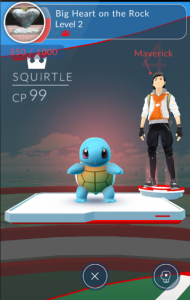 Overall, Pokémon GO is a pretty good game. It is modeled after the Niantic’s Ingress and it works, despite potential hiccups due to GPS glitches or service limitations. The graphics are pretty good. The pokémon look great especially when they’re shown through your camera as if they’re in our real world. The GPS mode looks alright. It’s colorful but pretty bland overall. The game itself is very addicting and I’d say moderately fun if you were to experience this yourself. I think this last bit is a very important point. The overall experience is really what you make of it and very subjective. I have heard friends play and not understand why it’s so cool when they could just play their 3DS versions while other friends love the fact that they have to explore the world outside, which I think is also pretty cool. While I would typically rate this as an okay game, one thing trumps all I have critiqued and shows what this game is really about.

I was eating at a pizzeria and was at a table outside with my family over the weekend. We were hanging out when a group of kids on their bikes rolled up because they were going to get some lunch. All had cellphones and all were playing Pokémon GO. I haven’t seen a game bring excitement and friends together like this in a long time. Not since the good ole days of gaming and not only are they together, but they’re venturing out into the world and experiencing it together. There’s something to Augmented Reality and this game shows the power it can have with the right franchise. This alone gives the game it’s high score from me. Now get out there and catch those Jigglypuff’s!

Side Effects of Popularity - 50%

Overall, the game is fun to pass the time and doesn't necessarily require loads of attention. You can jump in and out whenever you like and it gets people out of the house. Though, the app is buggy with freezes, servers go down frequently due to massive trainer traffic and it drains your battery since push notifications don't exist. Great game, but if you don't mind waiting, give it a couple weeks when trading with fellow players will be introduced.

I am an avid gamer and have been since a wee cub. I cut my teeth on fighting androids in the year 20XX (Mega Man), stomping on Goomba's (Mario Bros.) and taking a punch to the face (Street Fighter II Turbo). I still play to this day and am a MAJOR adventure gamer. Single player games are my bread and butter; this is where I spend most of my time, though I have been known to pour a ridiculous amount of hours on Destiny. Damn you, Bungie!!! I love all games from pixelated to Unreal Engine smoothness.
Previous BCW readies Valiant Comic storage boxes
Next Generation Zero #1 (Comics) Preview