Pure Sound Labs produces another pair of earbuds that doles out terrific tunes, and also protects your hearing.

We’ve looked at a few sets of headphones from Puro’s line here at BG. It kind of seems that there’s a trend with them, well two trends. First, they pretty much all look towards protecting your hearing. Second, they’re all solid to great in terms of quality.

So does that hold true for the IEM100’s here? Yes and yes. 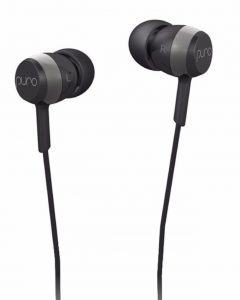 Something that I always look for in an earbud is a quality construction. And by that, I mean that they’ve got to be well-made yes, but also lightweight. After all, if we’re talking about an earbud, the lighter the better. I can’t say I’ve had much trouble with losing this style of headphone in the past, but I always feel like they going to tumble out of my ears at any given moment, especially wireless buds.

The IEM100’s are wired however, so they don’t really have the issue of excess heaviness. On top of the fact that they don’t have a lot of hardware built in though, they’re delightfully lightweight even for what they are.

With five pairs of different silicon tips included in the box, you’re also more than likely going to find a set that works for you. And once you do, I think you’ll find that they’re not really going to go anywhere once you don them.

In everyday use, there’ve been no problems with the construction at all. In fact, I’ve even jogged with mine and had no issues. That’s not a bullet point shared by the company, but is true nonetheless. I will add that the build won’t wow you really. There isn’t much about the look of the IEM100’s that’s all that unique.

The single most important thing when you’re talking headphones isn’t their look though, but whether they sound great or not. While looks are sometimes important, if those $100+ phones don’t sound good, what’s the point? Fortunately, the IEM100’s sound terrific. 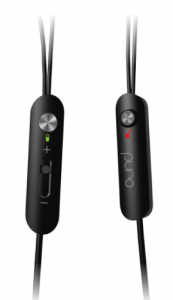 I’m not the biggest of audiophiles really, but I do have a penchant for quality equipment. On that end, I’m happy to say that these sound great. Music and phone calls both have a terrific depth snd quality when streaming through these headphones.

The overall sound is beautiful, as is the bass, which kind of surprised me. Don’t get me wrong, it’s not home-quality. I’m definitely not saying that you’re going to think that there’s a subwoofer strapped to your back, but it’s amazing how nice the bass does come across with the IEM100s.

That aside though, the main feature of the earbuds is that Safe Listening Volume Lock, something I found interesting, while checking out a review on GadgetsPage.com. While you normally might not love a pair of headphones that actually limits how loud you can listen to your music, there’s a very good reason behind this feature.

While you might not know it (or care all that much… now), the safe listening level for anything is about 85 decibels. Any louder and you do risk hearing loss. So that ear-shattering rock that you blast on your way to work? Yup, you guessed it, not that great for ‘future you’. I’m guilty of doing the same thing, so you’re definitely not alone if that sounds like you, but that still doesn’t make it a good thing.

Puro though, goes the opposite direction of most hardware companies and makes it a point across almost their whole line to protect your ears. So you’ll find that the IEM100’s deliver sound at the magic number of 85dbs (or lower). While this might limit the blastiness of your music, it doesn’t really limit it’s enjoyment.

The phones did take some getting used to the with the lock set. Once that happened though, I have to admit that I did get a little extra piece of mind. Hearing loss isn’t something that I ever really gave any thought to. Once I was clued in though, it definitely did become a concern. And with the IEM100’s, it isn’t something that you have to give much of a second thought to.

I liked the IEM100's from Puro way more than I thought I might. After blasting music most of my life, I have to admit that they did take some getting used to, but the quality and piece of mind that they give is worth it.

The movies, music and television of the '80s are Jessica's obsession. She's a fan of almost everything from the 'me decade' including (but not limited to) Barbie, Jem, She-Ra, Ms Pac-Man and neon print anything.
Previous Brutal Podcast 1: ReReVengence of the Technomancer
Next A Game of Changes (PC) Review