Home / Comics / Chicago gets it’s own Superhero in Nighthawk

Chicago gets it’s own Superhero in Nighthawk 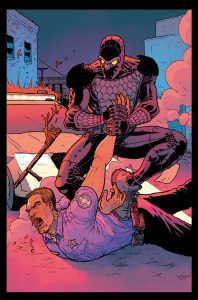 Battling for the souls of Marvel’s Chicago

Sure, Metropolis has Superman and Gotham has Batman. But no one ever talks about Chicago. Until now, with Nighthawk.

Taken from Marvel MAX’s Squadron Supreme comics from 2003, our hero was a wealthy playboy who spends his wealth to fund his own campaign in becoming a vigilante.

Nighthawk is not your typical superhero however. Think a unique mixture of Daredevil, Punisher and Batman. He’s got the bat’s bank account, Daredevil’s guilt over violence, and yet, he possesses Punisher’s ‘kill em all’ attitude. And he’s the only ‘hero’ in town.

If you are in the market for a new comic book series, I urge you to consider Nighthawk. It’s gritty, it’s violent, and it’s something new.

A fan of media on multiple platforms, I am always watching or playing something! Who knows what I will be on to next?
@mackeyp42
Previous Bethesda facing technical difficulties with Fallout 4 mods on PS4
Next Warcraft (movie) Review [SPOILER WARNING]