More than just swords are coming to Titanfall 2. 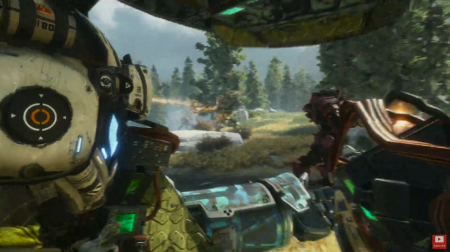 Titanfall lived a beautiful life, debuting a brand new shooter that showed how new hardware could change the genre that many believed was growing stale.  Fluid movement turned players into agile hunters, but they were still like flies when faced with the Titans that gave the gameplay a tense edge.  The finely tuned and expertly balanced multiplayer only experience was thrilling in every match, even as you hunted down the last fleeing pilot to finalize your victory.

It was also a short life.

Despite Respawn Entertainment’s long-lasting support, many decried the game its lack of guns, maps, titans and modes.  Particularly noteworthy: the lack of a single-player campaign.

But Respawn Entertainment did not advance blindly onto Titanfall 2.  They knew they had something special with the original’s silky smooth gameplay and blisteringly paced firefights.

If E3’s unveil has anything to show, it’s that they’ve taken the wants of the people and used them to fuel the start of a solid sequel.

Six new titans join the fray, the mechs that players call down from space to aide them in battle.  Sharp eyes will have caught sight of them in the new trailer.  New titan abilities were on display too- including a shoulder-mounted laser, a shockwave inducing ground pound, and a focused, devastating laser beam.

Titans aren’t the only ones with new gear- pilots will receive several handy tools as well.  The highlight is doubtlessly the grapple hook, which will allow players to swing around buildings, vault over enemy titans, and pull themselves at other players for a satisfying melee attack.  But the trailer also showed a couple others- among them a grenade that pulled nearby enemies towards it for easy kills and a teleportation device that may let you get the drop on players whose sensitivity isn’t quite turned high enough.

But perhaps more important to the expanse of Titanfall’s future is the addition of a single-player campaign.  Players will follow the story of a Militia rifleman who teams up with a Vanguard-class Titan by necessity to finish a mission that was never yours to begin with.  The single-player trailer showed off explosive set pieces, alien life, and a sequence in which you get to actually fall with your titan.  More details on the story itself will surely follow in the months leading up to Titanfall 2’s October 28th release on PC, Xbox One, and for the first time for the franchise, PS4.

While you wait, consider signing up for the “Multiplayer Technical Test” to get your hands on the game early.  Details on the test too will come at a later date.

Brutal Gamer's Nintendo Editor began his gaming life a little late- at five years old. But he's made up for it in the two decades since, gaming and writing about gaming with the same passion, fervor, and unrelenting love as his five-year old self.
Previous Battlefield 1 rocks E3 with new trailer and details
Next Bethesda E3 Press Conference Live