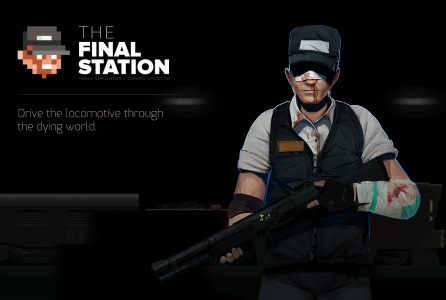 When alien pods land all over the world, the apocalypse begins, and life as we know it is no more. Aliens have flooded the streets, invaded homes and are now feeding on people. No place is safe. Not anymore. Humanity lost. But that is none of our concern. The show must go on. The cargo must be delivered. After all, how else are we going to get paid?

Your everyday train operator, punching alien zombies by day, spoon-feeding people by night, trying to get the cargo moving. This is whom the players control in the upcoming PC game called The Final Station.

“Get the train through the rails towards its destination”. That’s our character’s main objective. Amid the lifelessness the invasion has brought, the operator is forced to make stops at stations, each demanding a unique access code in order to let the train through.

Upon arrival, the player is met by the most unsettling feeling. Corpses laying around in dead silence, only interrupted by newspapers being blown away by the wind, and distant barks from what it seems to be an agitated dog. Despite the sidescrolling nature built upon, the game manages to peak the player’s curiosity and bravery alike. During his stay at the stations, in his quest to seek out the terminal’s access code, the humble operator has to carefully explore the facilities’ buildings. There is always possibility of danger lurking behind closed doors, or food being stored in a fridge and medkits in cabinets. 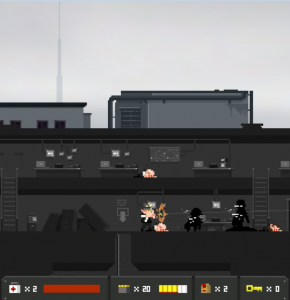 It appears our operator has undergone some serious TRAINing

Whenever a door opens, our gutsy engineer can stumble upon hordes of bloodthirsty zombies, with which he can deal in a number of ways. He can either try to punch his way through, risking his constitution in the process, or he can choose the more safe way of eliminating them from relative distance, using the limited pistol and/or shotgun ammo at his disposal. Or, in numerous occasions, just run away, hoping the zombies will get tired of chasing him. After all, when the going gets tough, the tough get going.

With some luck on his side (or lack of it, one might argue), the operator can also come across survivors, hiding behind locked doors, trying to keep themselves out of harm’s way. He then offers them a safe (as safe as it can be) passage to the shelter, getting them aboard the train. When the much craved access code is found, the operator can return to the train, and leave the current location whenever he feels ready to.

Fasten your seatbelts, you are in for a bumpy train ride!

In between stations, the operator’s duty shifts, as his role now closely resembles the job of a nurse in a retirement home. He must keep an eye out for the passengers, feeding them any time they are hungry and administaring a medkit whenever they have health issues, all the while he monitors the wagon’s ventilation and deprecation systems.

When the whole route is complete, the player arrives at what seems to be one of the few safe locations, a shelter of sorts. He then hands over the survivors in exchange for money and other handy stuff. There, the operator can rest, use his money to buy stuff and proceed to meet people, giving him instructions and advises about what should be done. 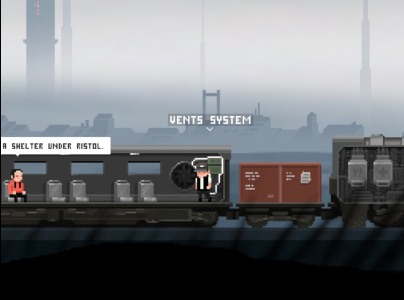 Hiding behind phenomenal atmosphere and smooth gameplay, there are some imperfections too, many of which I am confident can be fixed or adjusted in time for the game’s full release. In the current demo, the player dying does not appear to be costly. There is no real reason in using a medkit over dying, as a healthless survivor will die for good if he runs out of health during the trip, while the player will just respawn a few rooms back at full health, now more sure of what he is about face on the other end of that door. Moreover, during the train trips, although the passengers suffer from hunger and suffocating, the operator seems to have immunity to both,, being able to go all the way without eating and breath the poisonous air surrounding the cabin. Although not that big of a deal, these could possibly affect the immersion the game tries to achieve throughout its entirety. Lastly, there is something off as far as the train’s passengers behavior goes. Although it is funny seeing the operator run around feeding and patching up ill-fated people, and although it makes the trip seem edgy, it does not make much sense. The passengers could maybe do more than talking among themselves. Have a survivor fetch the food or let someone happen to be a nurse? Anything, really.

The Final Station’s recipe makes it one to keep an eye out for. The combination of killing alien zombies, managing resources and keeping a train on the rails, may hit the jackpot. The developers have done the hard part right and have plenty of time to improve the game even more. If they are as determined as our lovely operator is, they are set up to succeed.

More information on The Final Station is expected to be announced at this year’s E3, with its release date claimed to be sometime during the summer.

A happy childhood is the worst preparation for life. That's what Kinky Friedman once said and I want to believe that's true. I had a difficult childhood, all because of a PS2. See, I never bought a memory card. That thing was expensive. I always preferred buying a new game whenever I visited the store. I felt forced to fully complete the games before I turn off the console. Whether it was unlocking all endings on Tekken 3 or completing the Final Fantasy X story mode, it had to be done as fast as possible, before my mother accidentally tripped on the wire, or a storm caused a power cut. That traumatic experience led me to the PC, where everything could be stored on the hard drive, Never looked back since. Easy save easy life.
@GeorgEngland611
Previous Rock Band 4 rocks Mad Catz to the tune of a 470% loss
Next Let’s Talk About Sailor Neptune: An Interview with Actress Barbara Radecki