IDW’s Hasbroverse is a go with The Revolution

Transformers and G.I. Joe may have crossed paths in IDW Publishing’s comics before, but they’re set to now become part of a shared-universe, one that’ll also include ROM, The Micronauts, M.A.S.K., and more. 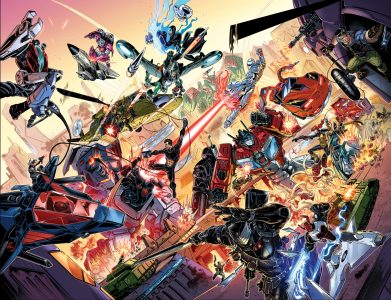 Following up on the big announcement that toy maker Hasbro’s classic action brands would all be teaming up on the big screen in one massive movie universe, comes a similar move from comic publisher IDW. Now, don’t freak out that all the books you’ve read over the last few years are going to be rebooted! IDW went out of their way in the press release and stressed that this isn’t a “reboot” of their current slate. Some of their current books have already established lengthy histories with the aforementioned characters, and they’re not about to throw all that away.

On the contrary, this is set to build on what’s already come. So all the G.I. Joe and Transformers legacy books are still canon in the new Hasbroverse, the difference is that they’re about to find themselves sharing the same fictional universe, one with a heck of a lot broader of a scope.

Revolution will be a five issue event book that will hit stands in bi-weekly fashion, starting this coming September. Though the storyline is still somewhat mysterious, IDW has confirmed that there will be a “world-shaking threat” (is that Unicron I sense?) that “just might see the destruction of the universe before it can truly begin”. So it looks like smart money is on a multi-dimensional event that brings everything together into one universe to rule them all.

Big enough in scale for you?

“The Revolution series builds out of a detail that was introduced in IDW’s first-ever issue of TRANSFORMERS in 2005,” said IDW’s Chief Creative Officer, Chris Ryall. “So to finally be able to build upon the various story elements we’ve seeded over the years, and which come into play in a big way starting with July’s ROM #1 even before the launch of Revolution, is a blast. We’ve been working toward a full-fledged universe for some time and it’s great fun to be able to finally bring it to vivid life, especially since it allows us to give the world new titles like the very-requested M.A.S.K., as well as some exciting new books still to be announced.”

“We’ve done plenty of crossovers in the past,” said Michael Kelly, Head of Global Publishing at Hasbro, “but nothing near this scope or scale. Our heroes, whether they are from Earth or from distant reaches of the galaxy, all have one thing in common: their powers and abilities are based primarily on technology. We have been able to use this fact to build a natural and believable link between all of these disparate characters. The result is a complex and dynamic world where all manner of conflicts and team-ups can and will exist. If you are a fan of Hasbro’s brands, your time is now.”

I have to say, I’m excited. I was a fan of almost everything listed here when I was a kid and I’m still a huge fan of most of it. Can’t. Freaking. Wait. (and uh, fingers crossed)

Here’s your full list of what’ll be coming and what names will be behind them all on the creative end. Honestly, it’s pretty impressive stuff. Ready to usher in the glorious age of Hasbro? Here’s what you’ll want to pick up:

Jason's been knee deep in videogames since he was but a lad. Cutting his teeth on the pixely glory that was the Atari 2600, he's been hack'n'slashing and shoot'em'uping ever since. Mainly an FPS and action guy, Jason enjoys the occasional well crafted title from every genre.
@jason_tas
Previous Odin Sphere Leifthrasir (PS4) Review
Next June 8th Valiant Previews: 4001 A.D. Bloodshot, Ninjak