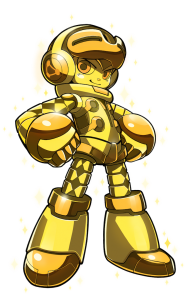 It’s been a while since Mighty No.9 was funded on Kickstarter, and it’d probably be safe to say that there was some hand-wringing (especially as of late) as to whether the game would actually ship this Summer or not. Now though, you can forget about all that, and just look forward to some blisteringly hard, old school gameplay in the side-scrolling style.

And that’s because Mighty No.9 has ‘gone gold’ at last. Yep, there’s nothing that can keep you from Infune’s latest platforming affair now except a few scant weeks, with the game set to hit shelves and digital outlets some time this June… with one small caveat. This is the home version of the game only, as the handhelds won’t see release till a “later date”. But hey, it looks fantastic, and at least you’ll be able to play it in some form right?

Just to reinforce that it’s on the way too, Inafune himself has released a special letter to fans, letting them know that the game is on the way, but also to say that he’s sorry for keeping you all waiting.

A message from Keiji Inafune:

“To all of our backers and fans of Mighty No. 9,

Firstly, I would like to say again how sincerely sorry we are for how long we have kept all of our fans waiting. We are finally able to deliver some long awaited news regarding Mighty No. 9. We have now confirmed the following release dates for Mighty No. 9: June 21st 2016 (North America & Asia) and June 24th 2016 (World Wide). We understand that as a result of the various delays we have disappointed and let down our fans, but we are happy to finally be able to deliver the game to everyone who brought us this far.

With the game having “gone gold” we are in the last final stages of being able to deliver it into your hands, be that via your favorite retail outlet, or via digital channels.
Therefore the release date we are announcing is set in stone and there will be no further delays for the game.

Portable versions for PlayStation® Vita and Nintendo 3DS T will follow at a later point.

It has been almost three years since the start of our Kickstarter campaign, which was only made possible through the support of our backers and fans around the world. This is a project where everyone’s passions were combined in order to create something very special, and we are looking forward to delivering the final product to everyone who was involved. There can be no stronger connection between game creators and game fans.

Now that the dust has settled, we will be delivering Mighty No. 9 to everyone next month. How long will it take you to clear the main story on NORMAL? How many people are going to be able to clear MANIAC mode? What is going to be the fastest record for the time attack mode? We are looking forward to seeing the community answer all of these questions for us! Make sure to let us know your feedback and thoughts on the game through our SNS channels as you play the game. Your voices are what made this game possible, and we want to continue hearing what you think so that it may influence our future endeavors.”

Jason's been knee deep in videogames since he was but a lad. Cutting his teeth on the pixely glory that was the Atari 2600, he's been hack'n'slashing and shoot'em'uping ever since. Mainly an FPS and action guy, Jason enjoys the occasional well crafted title from every genre.
@jason_tas
Previous Super Meat Boy arrives on Wii U
Next A Beautiful Planet: An interview with Film Director Toni Myers