Now this is a cool idea, package a movie ticket with varying levels of goodies from the film. And it all starts with Assassin’s Creed. 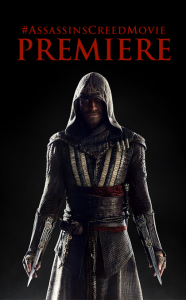 There’s some pretty nifty Assassin’s Creed stuff out there in the world. From McFarlane Toys-made hidden blades and action figures to clothing, it’s a pretty well-represented series of games and one of publisher Ubisoft’s crown jewels. And thanks to the forthcoming motion picture starring Michael Fassbender, it’s about to get a whole lot bigger.

Unlike most video game adaptations, Assassin’s Creed is actually looking really good with an A+ star like Fassbender in the title role and an original story that both presents something new for fans to dig into and also one that should fit into the overall narrative played out in the games.

It’s a familiar story for anyone who’s a fan, and follows Fassbender’s Callum Lynch in the modern age, who slips into the guise of his ancestor Aguilar through the use of the Animus (though that’s not mentioned by name in the pr text). As you might have guessed, Aguilar is an Assassin.

The film is still a long ways off, some 9 months, but that hasn’t stopped Kernel from getting in on the action. Kernel represents something that certainly seems to be all-together new, a movie ticketing service that also gives fans something tangible to hold onto. Just what you get is totally based on your level of fandom/amount of cash you’re willing to part with. In that way, it kind of reminds me of Kickstarter rewards.

Kernel co-founder Andy Martinez says: “We’ve curated bundles at all levels but the most important item included in each purchase is the ticket. That’s the shared piece that binds and connects all of us as Assassin’s Creed fans since the day we first plugged into the Animus and thought to ourselves,  ‘wow, this would make a great movie!’”

The ticket is also the shared bit that runs through all the bundles on offer from Kernel. These packs run the gamut from a watch to a hoodie, all the way up to a replica -handcrafted and numbered- crossbow movie prop. And some of it exclusive to Kernel, so you won’t find it anywhere else.

As you might imagine, some of these deals aren’t cheap. Again though, there’s stuff for every price level. The Collector’s Watch bundle for instance, which is very limited in availability by the way, will only run you $15.00 USD. That’s pretty awesome considering that a movie ticket alone is about that price to begin with.

The top of the list? Why that’d be that crossbow I mentioned. The bundle with that included run you $1200.00 USD, which just might be worth it to you depending on your level of AC devotion.

You can head over to Kernel’s website (here) right now to get in on any of this stuff. Also, you might want to stay tuned for more, as the company says that Assassin’s Creed is just the first of its tie-ins, and there’ll be plenty more to come.

Here’s what you can take home (in addition to the film viewing I mean):

Jason's been knee deep in videogames since he was but a lad. Cutting his teeth on the pixely glory that was the Atari 2600, he's been hack'n'slashing and shoot'em'uping ever since. Mainly an FPS and action guy, Jason enjoys the occasional well crafted title from every genre.
@jason_tas
Previous Valiant reaches back into its history, teases new Deathmate
Next Easter Greetings from the Hatchlings!