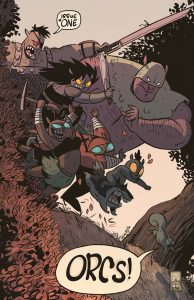 So you’re probably more than a little familiar with Orcs. Those rough and always ready for a fight baddies that pervade every fantasy tale/universe from their origins in Lord of the Rings to Warhammer and the legendary Dungeons & Dragons.

What you don’t see too often though is the monstrous creatures cast as the heroes of a story. That’s exactly what you get here in Orcs though. Straight from the mind of Christine Larsen, Orcs follows a more humorous tract than you might be used to as well, and has sprung up from the author’s love of the characters and LotR in general.

At its core, the main narrative is a treasure hunt that doesn’t go quite right. Yeah, that’s probably fitting for a troop of Orcs who just flat-out don’t seem to be able to get their stuff together. There’s also a “legendary hero” in these pages though, one who “discovers a mysterious island”… which of course should provide many a chance for our Orcish horde to fall all over themselves.

You can check out the full 8 page preview in the gallery below, as well as a cool Orcs bookmark plus the cover image, and also read through an interview with Larsen right here on website Forces of Geek. Orcs #1 debuts on comiXology on February the 10th.

Jason's been knee deep in videogames since he was but a lad. Cutting his teeth on the pixely glory that was the Atari 2600, he's been hack'n'slashing and shoot'em'uping ever since. Mainly an FPS and action guy, Jason enjoys the occasional well crafted title from every genre.
@jason_tas
Previous Mezco Toyz unveils Batman v Superman Mezitz box set
Next DOOM arrives this May, gets gore-coated new trailer